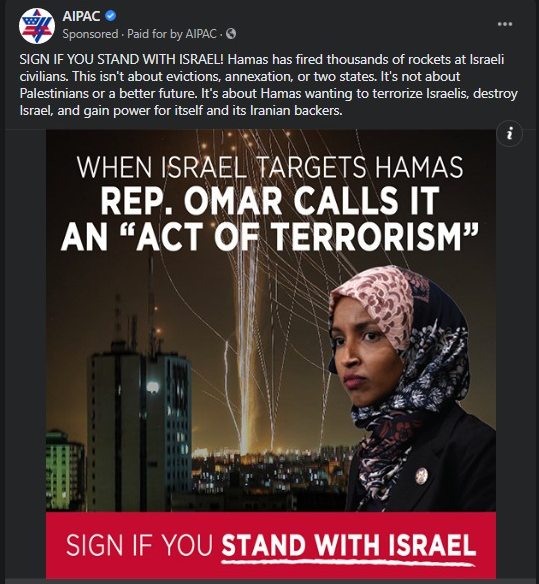 AIPAC’s paid advertisement on Facebook displays an image of Omar with rockets raining down on Israel in the background. The image falsely claims that Omar said that when Israel targets Hamas, it’s an “act of terrorism.” Omar actually stated that Israeli airstrikes killing civilians in Gaza is an act of terrorism and that Palestinians deserve protection.

In response to a tweet from Rep. Omar stating “Palestinian lives matter. Pass it On,” Rep. Greene replied “Jewish lives matter. So tell your terrorist buddies in Hamas to stop bombing them. #JihadSquad”

“This is another shameful attempt by AIPAC and Rep. Marjorie Taylor Greene to unleash anti-Muslim bigotry by falsely associating Representative Omar with terrorism.

“It is no surprise that a warmongering, Islamophobic lobby group like AIPAC is seeking to attack one of the few American Muslims elected to Congress, and Islamophobic tropes are especially unacceptable for a sitting U.S. representative.

“Social media platforms should immediately take down these anti-Muslim ads if they truly stand against bigotry and hate. And congressional leaders should condemn both Rep. Greene and AIPAC for this insidious Islamophobia.”

Representative Omar voiced her concern Monday stating it would be “appalling” for the Biden Administration to move forward with a planned precision-guided munitions sale to Israel amidst the ongoing bombardment in Gaza.

SEE: Omar: Appalling for US to Move Forward with Arms Sale to Israel

Yesterday, CAIR called on the Biden administration to stop blocking statements from the United Nations Security Council that would criticize Israel’s brutal military actions against Palestinians in Gaza and demand an immediate ceasefire.

In 2014, Israel carried out a similar military campaign that lasted seven weeks and took the lives of more than 2,000 Gazans, which included more than 500 children.

In March, CAIR and CAIR-Georgia renewed their call to expel Greene from Congress over her racist comments targeting a Muslim woman.