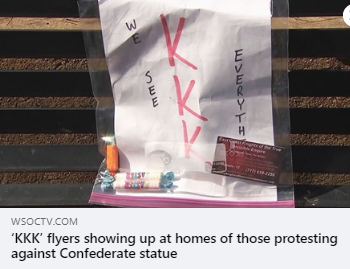 Police are investigating flyers with the letters “KKK” written on them distributed to homes in Statesville, N.C. The hate materials seemed to target homes of people who have protested against a Confederate statue in front of that city’s old courthouse. CAIR recently welcomed a vote to remove that monument.

SEE: ‘KKK’ flyers showing up at NC homes of those protesting against Confederate statue

“All Americans should be free to exercise their First Amendment rights without fear of intimidation by organized hate groups,” said CAIR National Communications Director Ibrahim Hooper. “This disturbing incident shows why all symbols of white supremacy and racism must be removed from our society.”

He noted that yesterday, CAIR supported a vote scheduled for today by the Tennessee Historical Commission that could lead to the removal of a bust of Confederate general and early leader of the KKK Nathan Bedford Forrest from the State Capitol.