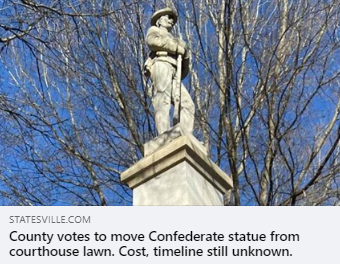 (WASHINGTON, D.C., 3/5/2021) – The Council on American-Islamic Relations (CAIR), the nation’s largest Muslim civil liberties and advocacy organization, today welcomed a vote to remove a Confederate monument from outside a courthouse in Statesville, N.C.

North Carolina’s Iredell County commissioners voted 4 to 1 Tuesday to relocate the statue of a Confederate soldier.

CAIR had previously joined the local NAACP in calling for the removal of the monument outside of the Iredell County Government Center.

“We welcome this vote to remove a symbol of slavery, racism and white supremacy from the grounds of an institution that must treat every person equally before the law,” said CAIR National Communications Director Ibrahim Hooper. “All similar symbols of bigotry should be removed from every public space.”

Hooper also decried the decision by Alabama’s House Judiciary Committee to reject legislation that would give cities and counties an avenue to take down Confederate monuments.