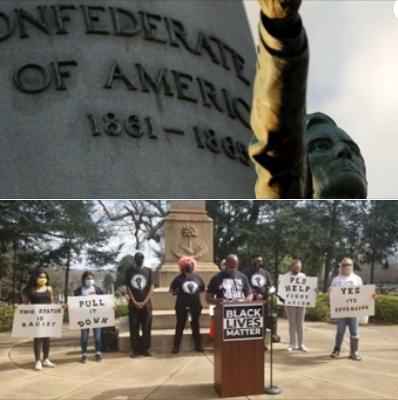 (WASHINGTON, D.C., 3/1/2021) – The Council on American-Islamic Relations (CAIR), the nation’s largest Muslim civil rights and advocacy organization, today supported a push for the removal of a Confederate statue in Greenville, S.C., and for a Virginia bill calling for the removal of the name of the president of the Confederacy from a highway in that state.

Virginia’s Senate passed a bill that calls for the removal of the name of Jefferson Davis from Route 1. H.B. 2075 with a vote of 30-9 on Thursday. The House of Delegates passed the same bill in February.

SEE: Confederate President’s Name to Be Removed From Route 1

In South Carolina, CAIR joined Black Lives Matter activists in calling for the removal of a Confederate statue in downtown Greenville. The activists stressed “the need to remove all symbols of racism, bigotry and equality.”

SEE: Activists push for removal of Confederate statue in Greenville

“We support all those nationwide who seek to remove any symbol celebrating the racism and white supremacy that the Confederacy sought to protect and promote,” said CAIR National Communications Director Ibrahim Hooper. “Removal of Confederate symbols and names is just a first step to addressing systemic anti-Black racism.”

Hooper noted that last week, CAIR called for the removal of confederate monuments in Berryville, Va. and in Morganton, N.C, and condemned racist remarks by a state senator in Santa Fe, N.M.

Hooper said Washington, D.C.–based CAIR and the American Muslim community are standing in solidarity with all those challenging anti-Black racism, xenophobia, Islamophobia, anti-Semitism, and white supremacy.