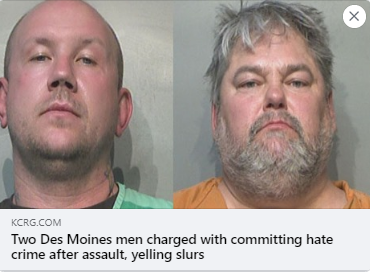 (WASHINGTON, D.C., 4/20/2021) – The Council on American-Islamic Relations (CAIR), the nation’s largest Muslim civil rights and advocacy organization, today condemned an allegedly racially-motivated assault of a black man by two white males in Des Moines, Iowa. The assailants have since been charged with hate crimes.

“The unfortunate growth of white supremacy, systemic anti-Black racism and other forms of bigotry nationwide inevitably leads to bias-motivated attacks as reported in this case,” said CAIR National Communications Director Ibrahim Hooper. “All Americans must take on the duty of challenging and repudiating hate whenever and wherever it rears its ugly head.”