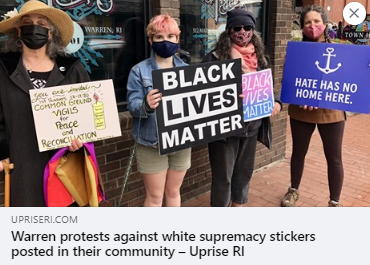 Some 90 people gathered in front of the Warren Town Hall on Sunday to protest the stickers promoting KKK and white supremacist propaganda.

Peaceful rally in Warren after racist symbols posted around town

“We condemn this campaign to promote white supremacy and racism, and we join in solidarity with all those who are taking a principled stand against hate in Rhode Island and nationwide,” said CAIR National Communications Director Ibrahim Hooper.

He noted that last week, CAIR condemned the targeting of a Sandpoint, Idaho, couple by white supremacist propaganda.

Video: CAIR Says ‘Throw ‘Confederate Heritage Month’ into the Dustbin of History Where it Belongs’