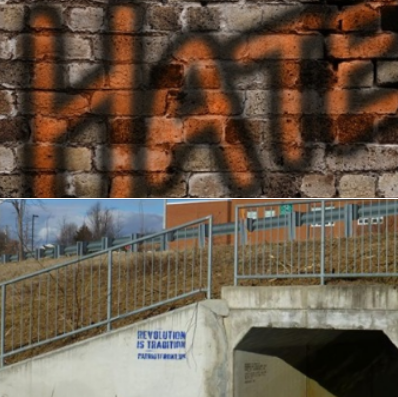 In Virginia, Leesburg police discovered an act of vandalism near Frederick Douglass Elementary School. The graffiti featured white nationalist messages and was found the same weekend as white supremacist flyers were circulated in the neighborhood. The elementary school is named after the Abolitionist Frederick Douglass.

In Rhode Island, racist graffiti was found on the Stillwater Scenic Trail. Some residents are concerned with the city’s slow response, specifically that elected officials have yet to publicly condemn it.

“The continued targeting of Black and minority communities, and the promotion of white supremacy and racism, must end,” said CAIR National Communications Manager Ayan Ajeen. “Local, state and national leaders must speak out forcefully against growing bigotry nationwide.”

She said the American Muslim community and CAIR are standing in solidarity with all those challenging anti-Black racism, xenophobia, Islamophobia, anti-Semitism, white supremacy, and all other forms of bigotry.