CAIR Condemns Rahm Emanuel for Anti-Muslim ‘Sunnis and Shiites’ Trope, Says He is Unfit to Serve in Biden-Harris Administration 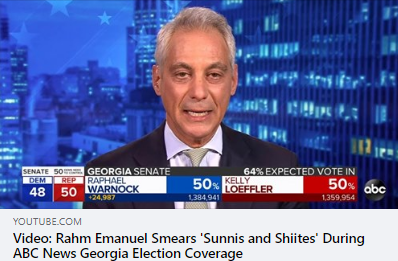 While speaking live on air, Emanuel compared post-Trump relations between Republicans and Democrats to Shia and Sunni Muslims, saying: “It’s going to make the Sunnis and Shiites look like a very calm family gathering.”

CAIR said the offensive comments represented another reason why Emanuel “should not be included in the Biden-Harris administration.”

Sunni and Shia are the two main branches of Islam, with followers coexisting peacefully across the world.

“Rahm Emanuel’s comments about Muslims were demeaning, uninformed and Islamophobic. In America and abroad, Sunni and Shia Muslims live as neighbors, co-workers, friends, and family members.

“Emanuel should not misuse Islam to ‘spice up’ his political commentary. This remark is just one reason why Emanuel should not be included in the Biden-Harris administration, let alone in President Biden’s cabinet.”