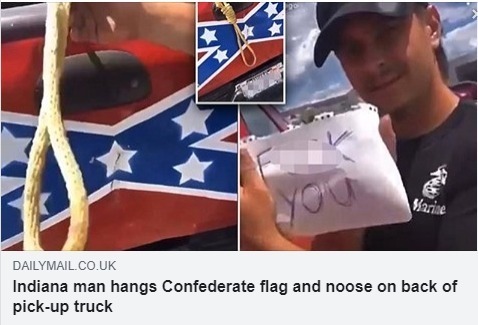 (WASHINGTON, D.C., 7/14/2020) – The Council on American-Islamic Relations (CAIR), the nation’s largest Muslim civil rights and advocacy organization, today condemned a series of racist incidents that occurred across the nation over the past few days.

CAIR condemned the actions of a man captured on video showing off a Confederate flag on the back of his pick-up truck and a noose, which he “joked” was a leash for his dog in Bedford, Ind.

SEE: Indiana man hangs a Confederate flag and noose on the back of his pick-up truck and jokes that it was just a leash for his dog

CAIR welcomed the removal of Dianna Ploss, a now-former radio host at WSMN, taken off the air after livestreaming herself verbally attacking a landscaping crew on Main Street in Nashua, N.H. In the video, she said, “It is America, you should be speaking English. You should be speaking English,” and “It’s English, English, English. Is anyone here illegal?”

SEE: NH Radio Host Taken Off the Air for Racist Tirade Says ‘Blank You’ to Critics

CAIR also condemned white supremacist propaganda found in New Kent County, Virginia. Several people reportedly found items being in or near their mailboxes. The material is reportedly from a KKK group in North Carolina.

“Continuing acts of anti-Black racism and other forms of bigotry must be condemned by all Americans and are an indication of how far we have to go in establishing a society truly based on justice and equality.”