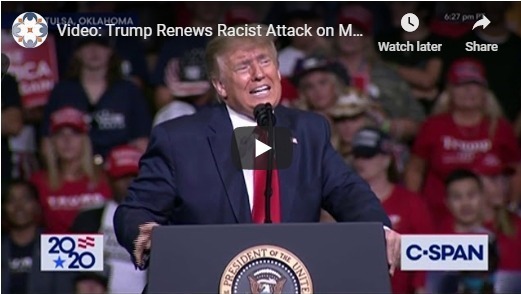 CAIR also rebuked Trump for his ongoing bigoted use of anti-Asian terms to describe the COVID-19 global pandemic and his defense of statues honoring Confederate “traitors.”

During the rally, Trump renewed his racist attacks on  Rep. Omar, who emigrated to the U.S. from Somalia as a child, by falsely claiming she would want “to make the government of our country just like the country from where she came, Somalia: no government, no safety, no police, no nothing — just anarchy” adding “and now she’s telling us how to run our country.” Trump concluded the racist diatribe with, “No, thank you.”

Trump also referred to COVID-19 as the “Kung flu,” a racist anti-Asian term for the virus and defended Confederate statues as “our monuments.”

[NOTE: CAIR believes Trump’s repeated use of the anti-Asian term “Chinese virus” and other racist dog-whistle terms has directed contributed to the rise in anti-Asian bias incidents and hate crimes taking place across the country.]

“We are a nation of immigrants. Every decent American – and particularly public officials — should condemn and repudiate Trump’s racist national origin-based attack on Muslim Congresswoman Ilhan Omar.

“Trump’s renewed racist attacks on Congresswoman Omar and his defense of Confederate traitors are nothing more than a desperate attempt to distract the nation from his own bungled response to the coronavirus pandemic and his hostility to growing protests against systemic anti-Black racism and police brutality.

“Trump’s continued use of anti-Asian terms to describe the coronavirus clearly shows that he does not take the rise in anti-Asian hate crimes seriously – and is quite happy to inspire more attacks with his bigoted words.

“Americans are growing tired of Trump’s racist antics as bully in chief, it’s time he grew up and started acting like the leader of the United States of America, not the Confederate States of America.”

In March, CAIR condemned Trump’s use of the racist dog whistle “Chinese virus” and CAIR Board Chair Roula Allouch wrote the op-ed, “Asian-Americans Deserve Our Solidarity, Not Bigotry.”

For the past several months, CAIR has condemned multiple anti-Asian hate crime attacks that have taken place across the nation.

In September, CAIR strongly condemned President Trump for sharing a false, Islamophobic smear targeting Rep. Omar on Twitter and called on that social media company to suspend the president’s account for violating its terms of service.

The Washington-based civil rights organization has reported an unprecedented spike in bigotry targeting American Muslims, immigrants and members of other minority groups since the election of Trump as president