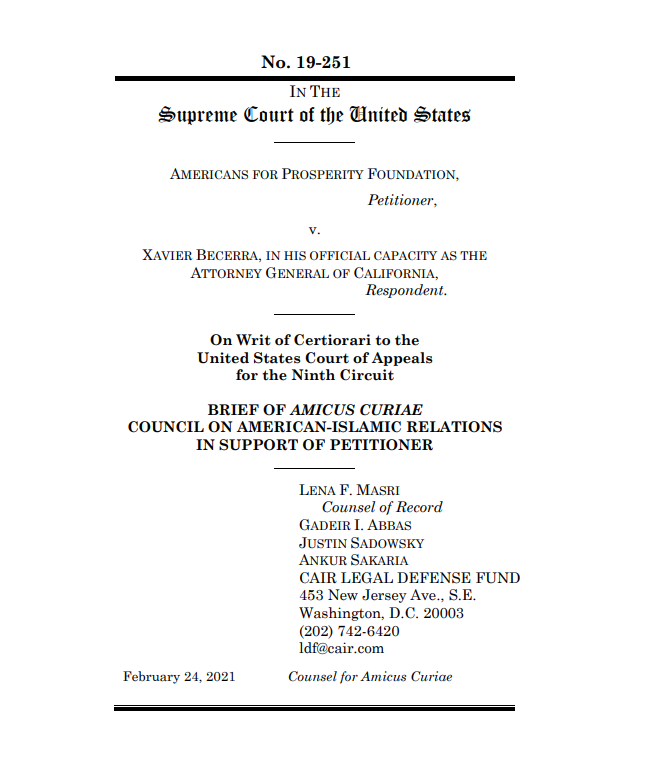 (WASHINGTON, D.C., 2/26/21) — The Council on American-Islamic Relations (CAIR), the nation’s largest Muslim civil rights and advocacy organization, today announced the filing of an amicus (friend of the court) brief with the United States Supreme Court regarding the federal government’s ability to collect associational information in bulk in violation of the First Amendment.

In Americans for Prosperity v. Becerra, the Supreme Court is reviewing a decision by the Ninth Circuit. The Ninth Circuit held that as long as a government’s collection of sensitive donor information “increases. . .investigative efficiency” and as long as the collection is for “nonpublic” use, there can be no First Amendment concerns.

CAIR supports the confidentiality of donor information and asserts that the Ninth Circuit’s statement of First Amendment law dramatically weakens constitutional protections for all freedom of association claims. CAIR regularly challenges the constitutionality of the federal terrorist watchlist, including on First Amendment freedom of association grounds.

As explained by CAIR’s amicus brief, “The federal terrorist watchlist system rests on a foundation of bulk collection and analysis of American Muslims’ associations.”

“The experience of the American Muslim community leaves no doubt that government officials monitor their associations in order to falsely label them as terrorists,” said CAIR National Litigation Director Lena F. Masri. “Robust First Amendment protections are vital to civil liberties for all Americans.”

“The Government has taken away Muslim rights via guilt by association long enough. The First Amendment’s right to free association should stand in the way of these efforts,” added CAIR Trial Attorney Justin Sadowsky.