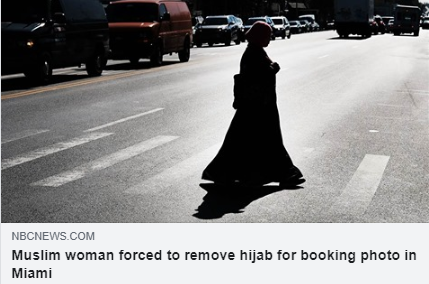 (MIAMI, FL, 6/19/2020) – The Florida chapter of the Council on American-Islamic Relations (CAIR-Florida), the nation’s largest Muslim civil rights and advocacy organization, today condemned the Miami Police Department for forcing a Muslim woman to remove her hijab for a booking photo after being arrested during a protest last Saturday.

NBC News reported that Alaa Masri, “a Muslim woman arrested during a Black Lives Matter Miami was forced to remover her hijab for a booking photo.”

The Miami the City of Miami Police Department wrongfully arrested Alaa Masri, a UCF student, providing medical aid to protesters participating on a Black Lives support march on June 10th. Following her arrest, the Miami Police unlawfully removed her hijab for booking. Following this, they did not allowed Ms. Masri to have her hijab for the remainder of the seven hours she stayed incarcerated in the presence of men.

“We believe that Miami Police’s forceful removal of Ms. Alaa Masri’s hijab for a public booking photo is a severe violation of her constitutionally protected religious freedoms. Keeping her from wearing the hijab for the over 7 hours while in custody arrest shows deliberate disregard for Ms. Masri’s constitutional rights. Attorney Saleh added: “CAIR-Florida is prepared to address legal violations by the department”

aiming to help her cover costs of her defense, cover costs for a civil suit, support organizations standing up for Black Lives, and support a campaign to change all police department policies in Florida to protect the hijab of Muslim women arrested.