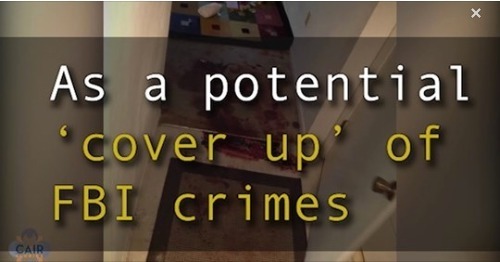 (MIAMI, FL, 6/22/2020) – The Florida chapter of the Council on American-Islamic Relations (CAIR-Florida), the state’s largest Muslim civil rights and advocacy organization, today welcomed Eleventh Circuit Court of Appeals decision reversing the dismissal by the U.S. District Court – Florida Middle District in the case of Todashev v United States on the key issue of the shooting of Mr. Todashev. The family of Ibragim Todashev is represented by James Cook, Esq., and CAIR-Florida.

Todashev was shot to death inside his home by an FBI agent in Orlando, Florida, in 2013. Todashev was in the U.S. on a student visa. He was a talented, mixed martial arts amateur who trained at a Boston gym with, among others, the Harvard Wrestling Team and Tamerlan Tsarnaev, a deceased suspect in the Boston Marathon Bombing. There was no suspicion that Mr. Todashev was involved in the bombing. He was being questioned as a “person of interest” in a Waltham, MA, drug robbery/murder in which Tsarnaev was suspected.

On the evening of May 22, 2013, FBI agent Aaron McFarlane arranged to meet Mr. Todashev at his apartment for “a few final questions so we can close the case.” What followed was four-and-a-half hours of intense interrogation by four armed officers. The officers claimed that just before midnight, Mr. Todashev was about to confess some sort of involvement in the Waltham crime when he allegedly and without provocation attacked the officers with a broom handle. He was shot seven times by Agent McFarlane. According to one of the officers, Mr. Todashev allegedly ran at the officers at full speed, holding the broom handle over his head with both hands. Autopsy evidence was inconsistent with the police accounts.

Agent Aaron McFarlane is a former Oakland, CA, police officer who had joined the FBI after being granted immunity from prosecution for falsifying police reports in the infamous Oakland “Riders” case. As an Oakland police officer, McFarlane was successfully sued for physical abuse of civilians.

The federal district court dismissed the case prior to allowing the family to inspect the evidence other than what was publicly available, such as heavily censored interview transcripts and a few heavily censored photos prior to dismissing the case. Now the family’s attorneys will finally be able request the evidence that has been almost exclusively within the control of McFarlane and the government. The Eleventh Circuit Court of Appeal’s per curiam ruling held that “the district court abused its discretion by denying the Plaintiff any opportunity to conduct discovery in this case before being made to respond to McFarlane’s motion for summary judgment.” The Court vacated the Summary Judgment as to McFarlane as “premature” and “reversed the district court’s denial of Plaintiff’s request to conduct discovery.” Now the case is remanded back to the district court for further proceedings.

Attorney for the Plaintiffs, James Cook, stated “For the first time, we are going to start to get some evidence, video recordings with audio, the supposed written ‘confession,’ actual quality photographs of the scene, and some of the physical evidence for testing. We will hopefully get unredacted documents. We should have an opportunity for an expert to look at the bullet trajectories.”

There have been 150 other FBI shootings that have all been found “justified” as this one was. In 2013, CAIR Florida set off on a quest to find justice for the murder of Ibragim Todashev and shed light on the dangers of the extreme practices of the FBI when their authority is continually left unchecked. We cannot allow these cases of excessive force and murder to be found as “justified” by the very agents that are supposed to holdup the laws of this country.