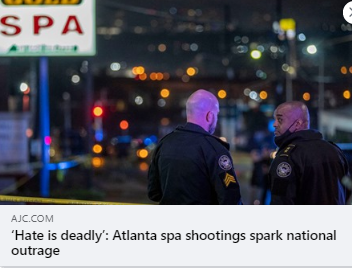 (ATLANTA, GA – 3/17/2021) – The Georgia chapter (CAIR-Georgia) and national office of the Council on American-Islamic Relations (CAIR) today expressed strong solidarity with the Asian-American community after mass shootings at three different businesses in the Atlanta area took the lives of eight people. At least six of the victims are reported to be Asian and seven of the eight victims are women.

In a statement, CAIR also called for a full hate crime investigation into the shooting, which occurred amid a rise in bias crimes targeting Asian-Americans since the start of the COVID-19 pandemic.

“The Georgia Muslim community mourns the senseless deaths of our Asian-American sisters and brothers. We extend our condolences to the families of the victims and the entire Asian-American community inside and outside of Georgia.

“Although we still need to learn more about how and why these attacks happened, hate and animosity against communities of color, particularly targeting women and the elderly is not new. CAIR-Georgia will extend any help and support needed in this moment and continue to stand against hate and bigotry in all its ugly forms.”

“The hate against the Asian-American community has and continues to be stoked by the incendiary tenor of the racist rhetoric of some elected officials. From pejoratively dubbing the coronavirus the ‘China virus’ to the xenophobic immigration policies of yesterday and today, women, lower income families, and people of color continue to be the primary victims. Yesterday’s tragedy must be investigated for what it appears to be, a hate crime.”

Over the past year, CAIR has repeatedly spoken out against anti-Asian hate crime attacks that have taken place across the nation amid the COVID-19 pandemic.

In March 2020, CAIR condemned Trump’s use of the racist dog whistle “Chinese virus” and CAIR Board Chair Roula Allouch wrote the op-ed, “Asian-Americans Deserve Our Solidarity, Not Bigotry.”

“We strongly condemn these horrific shootings and express our unwavering solidarity with our Asian-American neighbors who have been repeatedly targeted by hateful attacks in recent months and years. It is long past time for all public officials to confront the vile racism and irrational bigotry that is spreading like wildfire across our nation.”

CAIR-Georgia is part of is America’s largest Muslim civil liberties and advocacy organization. Its mission is to enhance understanding of Islam, protect civil rights, promote justice, and empower American Muslims.