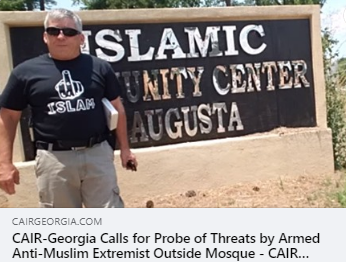 (ATLANTA, GA, 12/24/20) – The Georgia chapter of the Council on American-Islamic Relations (CAIR-Georgia) today condemned the most recent public display of bigotry by Augusta extremist James Stachowiak.

Stachowiak, 59, was charged with disorderly conduct after brandishing a baton at a Black man and threatening to shoot him at a Martinez supermarket. Stachowiak was wearing an anti-Black Lives Matter t-shirt at the time. The Dec. 9 incident occurred the same day Stachowiak attended a rally for U.S. Sen. David Perdue in Martinez.

Stachowiak, a well-known anti-Black, anti-Islam, and pro-Confederate extremist, has in past threatened violence against Georgia Muslims while carrying a weapon and desecrating a Quran, Islam’s holy text, outside an Augusta, Ga., mosque. He also has a long-documented history of virulent hate speech, calling for “Death to Islam”, making obscenity-laden threats, and calling for Black Lives Matter protesters to be “shot on site.”

In a video posted on YouTube on April 30, 2016, Stachowiak engages with a fellow customer at a Wal-Mart about Islam and American Muslims. During the discussion Stachowiak declares, “My language is people should burn mosques, kill all Muslims. They started a war in America.”

CAIR Georgia has previously called upon federal and local authorities to investigate before these threats escalated to physical violence.

SEE: CAIR-Georgia Calls for Probe of Threats by Armed Anti-Muslim Extremist Outside Mosque

“What we saw earlier this month is the expected result of years of hateful and violent hate speech. Far too often, threats against people of color and minority communities are not taken seriously. Federal and local authorities were notified and briefed on Stachowiak’s increasingly alarming conduct years ago. For them to ignore all the signs of impending violence put innocent people at risk.

“Even now, while Stachowiak has been charged with disorderly conduct, the incident was perplexingly not deemed a hate or bias crime. Hate crimes legislation runs the real risk of being used to perpetuate harsher sentencing against people of color while not being enforced as readily when the perpetrator is white. Law enforcement should call this incident what it is, a hate crime motivated by Stachowiak’s bias against Blacks. We stand with the Black Lives Matter movement to say that Black lives matter and must be protected.”