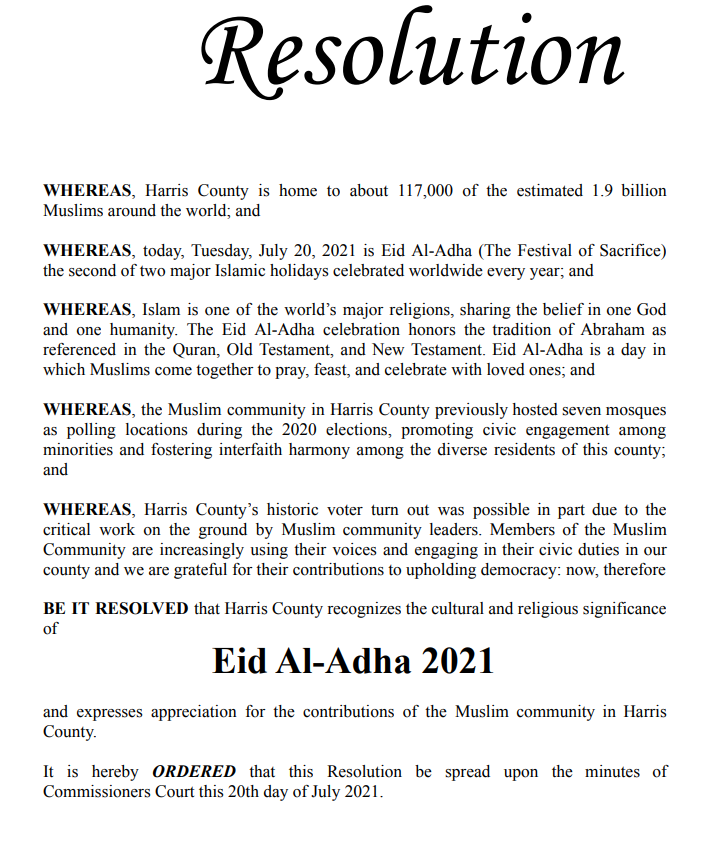 (HOUSTON, TX, 7/20/2021) — The Houston, Texas, chapter of the Council on American-Islamic Relations (CAIR-Houston) today welcomed a resolution recognizing the cultural and religious significance of Eid al-Adha as well as the Muslim community’s contributions in promoting civic engagement. The resolution was introduced in the Commissioners Court by Harris County Judge Lina Hidalgo.

Judge Lina Hidalgo’s resolution: (1) recognizes the cultural and religious significance of Eid al-Adha, (2) expresses its appreciation and respect for the contributions of Muslim Americans in historic voter turnout and promoting civic engagement in Harris County, and (3) wishes Harris County, Texas Muslim Americans and Muslims around the world observing Eid al-Adha a prosperous holiday.

In a statement, CAIR-Houston Director of Operations Ambreen Hernandez said:

“CAIR-Houston welcomes this resolution in celebration of the Eid al-Adha holiday and recognizing Harris County Muslim’s contributions in civic engagement for the greater good of its community.

“Muslims in the U.S. have a long history of being active in their communities and in Harris County. This was evident in voter turnout results and countless local efforts. Our local participating mosques and community centers played a notable and critical role in expanding voter access in a historic election- which can serve as a model for other cities across the nation.

“We thank Harris County Judge Lina Hidalgo and representatives at the Harris County Commissioners Court who join on this effort in extending best wishes to Harris County Muslims in celebrating Eid al-Adha.”

Observed for more than fourteen centuries, Eid al-Adha is a holiday of great importance to millions of Muslim Americans and approximately 1.5 billion Muslims around the world. Eid al-Adha, or the Festival of the Sacrifice, honors Abraham’s symbolic sacrifice of his son to God, as referenced in the Quran, Old Testament, and New Testament, and is commemorated around the world by prayers, charity events, and festivals.

FOR BACKGROUND ON EID AL-ADHA: CAIR: American Muslims to Mark End of Pilgrimage to Mecca (Hajj) with Communal Prayers, Celebrations