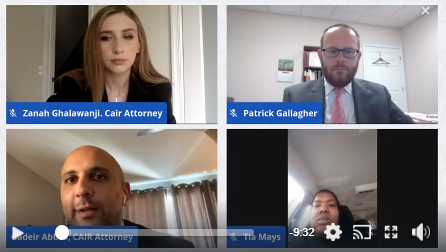 (WASHINGTON, DC, 8/6/20) — The Council on American-Islamic Relations (CAIR) and the law firm Jacobs & Crumplar today held an online news conference to announce the filing of a lawsuit in Delaware federal court on behalf of three Muslim women forbidden by the Delaware Department of Services for Children, Youth, and Their Families (DSCYF) from wearing hijabs, or Islamic head scarves.

In its lawsuit, CAIR wrote in part:

“Plaintiffs’ request for a religious accommodation to wear a hijab does not constitute undue hardship upon DSCYF or otherwise affect DSCYF’s business operations.

“. . .DSCYF did not engage in any interactive or good faith process regarding Plaintiff’s sincerely-held religious beliefs. Instead, DSCYF ignored Plaintiffs’ alternatives, prohibited them from working, and created a hostile work environment for them until their employment ended.”

CAIR is seeking an injunction prohibiting DSCYF from discriminating against employees on the basis of religion, sex or race, and to allow accommodation for religious head coverings. The lawsuit also seeks payment for economic damages and emotional harm, along with punitive damages and legal costs.

[NOTE: Last year, Madinah Brown — a plaintiff in the lawsuit — filed with the Equal Employment Opportunity Commission (EEOC) against the Delaware agency.  Two other Muslim women who were also prohibited from wearing hijab at work have since come forward.]

CNN: State Employee Claims Delaware Discriminates Against Her Over Hijab

“No one should have to pick between their livelihood and their faith,” said CAIR attorney Zanah Ghalawanji. “By standing up for their rights and fighting back, Tia, Shakeya and Madinah hope that this agency will be prohibited from imposing this terrible predicament on other women in the future.”

“The State’s treatment of these three Muslim women of color is wrong and violates multiple applicable laws,” said attorney Patrick Gallagher. “Jacobs & Crumplar is proud to stand with CAIR on behalf of these women in this matter of great public importance.”