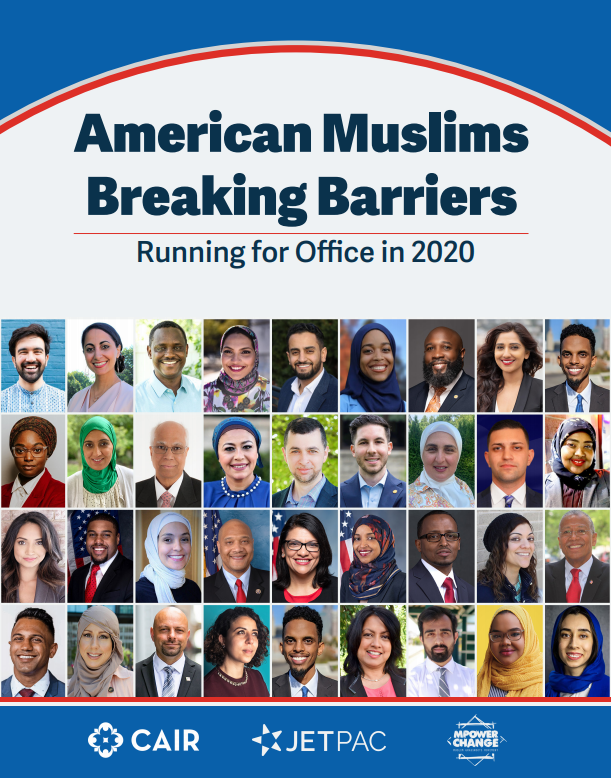 A record number of 181 Muslim candidates ran for office in 28 states and Washington D.C. in 2020. CAIR, Jetpac, and MPower Change also identified 16 notable American Muslim hires and appointees to the Biden-Harris administration.

(WASHINGTON, D.C, 3/15/2021) – The Council on American-Islamic Relations (CAIR), the nation’s largest Muslim civil rights and advocacy organization, Jetpac, a representative-driven organization that trains American Muslims who want to run for office, and MPower Change, the largest Muslim-led social and racial justice organization in the United States, today released a comprehensive report of all Muslim-identifying candidates who ran for public office in 2020.

SNAPSHOT: 181 candidates were on 2020 ballots across 28 states and Washington D.C., which is the highest number since the three organizations started mapping the electoral progress of politicians who identify as Muslim.

“A record number of American Muslims running for office is a testament to how a healthy democracy thrives when it is truly representative of the people. The success behind all of these campaigns required a diverse coalition of groups and grassroots efforts to get out the vote,” said CAIR National Executive Director Nihad Awad. “American Muslims are civically engaged now more than ever and are fighting for justice on behalf of Americans at all levels of government. We should be proud of this historic moment.”

“More and more American Muslims are answering the call for public service because we recognize that our democracy is stronger when our policymakers represent a diverse set of backgrounds and experiences,” said Mohammed Missouri, Executive Director of Jetpac. “American Muslim representation is a crucial part of defeating the rise of violent Islamophobia in our society, and I’m very glad that our community continues to build civic power across all levels of government.”

“Muslim communities are taking control of their political destiny. Our people care about immigration policies that will reunite families and equitable policies like living wages for all” said Executive Director of MPower Change Linda Sarsour. “If we don’t see elected officials representing our values, Muslims will continue running for office to build power and achieve that change.”

Below is a summary of Muslim electoral results from the 2020 election cycle.

Jetpac is a representation-driven civic engagement coalition organization. Its mission is to make our government more representative of the American people.

MPower Change is the largest Muslim-led social and racial justice organization in the United States.