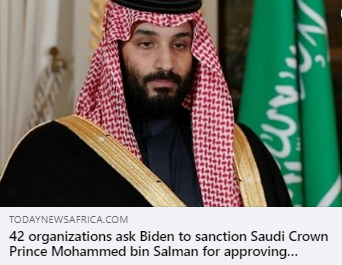 The letter was in response to the release of the long-awaited declassification of the U.S. national intelligence report regarding the involvement of Mohamed Bin Salman in the murder of Jamal Khashoggi.

The statement reads in part:

“President Biden should use his power to impose the full range of sanctions available under the Global Magnitsky Act – including asset freezes and visa bans – on MBS as well as any other Saudi national implicated in the murder. Global Magnitsky Act sanctions should also be imposed on the leadership of Saudi Arabia’s sovereign wealth fund, the Public Investment Fund, which owns the airline and airplanes used to transport Jamal Khashoggi’s assassins between Saudi Arabia and Turkey.

“The U.S. should also reset its entire relationship with this brutal monarchy, starting with a ban on all arms sales to Saudi Arabia. The president should demand that Saudi Arabia lift the travel ban against women’s rights defender Loujain al-Hathloul and release and drop all charges against all detained women’s rights defenders. President Biden should seek the unconditional release of all prisoners of conscience, including Islamic scholar Salman Alodah, aid worker Abdulrahman al-Sadhan, human right advocate Waleed Abu al-Khair, and members of the Saudi Association for Civil and Political Rights (ACPRA). Saudi Arabia has demonstrated a repeated pattern of abuse and harm, from the murder of Jamal Khashoggi to war crimes in Yemen to repression of its own citizens that both violate U.S. export controls and create an untenable situation for any continued security assistance. Finally, we urge the President to instruct the Federal Bureau of Investigation to open a criminal investigation into the murder of a U.S. Resident, as they have for other Americans executed abroad.

“The release of the ODNI report is a much-welcomed act of transparency, but it will ring hollow unless accountability follows. There must be equal application of the law to all people, no matter how high the position in government an individual may hold. It is critical for the U.S. government to send a clear message to MBS and all other world leaders: this heinous crime will not be forgotten, and there will be justice.”

The declassified ODNI report, released last week, reveals for the first time the evidence that the Central Intelligence Agency relied on to conclude that MBS approved Jamal Khashoggi’s murder.

Last week, the Department of State announced the “Khashoggi Ban,” a new visa restriction policy pursuant to section 212(a)(3)(C) of the Immigration and Nationality Act.  The Khashoggi Ban allows the State Department to impose visa restrictions on individuals who, acting on behalf of a foreign government, are believed to have been directly engaged in serious, extraterritorial counter-dissident activities.

The Trump administration had refused to make the ODNI report public despite a statute ordering it to do so. Instead, it only released a classified version of the document to Congress on February 20, 2020.

In November 2018, the U.S. Department of the Treasury’s Office of Foreign Assets Control (OFAC) designated Saud al-Qahtani, his subordinate Maher Mutreb, Saudi Consul General Mohammed Alotaibi, and 14 other Saudis under the Global Magnitsky Act for the murder of Khashoggi. These designations block any of their property within U.S. jurisdiction and ban U.S. persons from transacting with them or their assets.

The State Department also issued travel bans against them based on these sanctions, barring them and their immediate families from U.S. soil. There is no reason why MBS should not be subject to the same, having approved the crime for which these individuals were sanctioned.