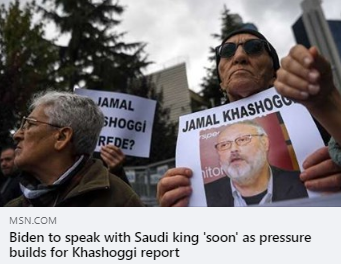 According to Reuters, “White House press secretary Jen Psaki said a call between the president and the Saudi king is ‘still in the process of scheduling’ but is expected to happen soon.”

Advocacy groups expect the call to take place in the next several days and the report to be issued either the day of the call or the following day.

A follow-up media advisory with the time of the planned press conference will be issued following the release of the report.

Khashoggi, a critic of the Saudi Arabia government’s human rights abuses and restrictions on political freedom under Crown Prince Mohamed Bin Salman, wrote columns for The Washington Post. He was murdered and dismembered in October 2018 after being lured to the Saudi Consulate in Istanbul by Saudi agents.

According to a recent report by CNN: “The two private jets used by a Saudi Arabian assassination squad that killed and allegedly dismembered journalist Jamal Khashoggi were owned by a company that less than a year prior had been seized by the Kingdom’s powerful crown prince, Mohammed bin Salman.”

On January 14, D.C. Councilmember Brooke Pinto introduced a measure that seeks to rename the street in front of the Saudi Arabian Embassy in Washington, D.C., after Khashoggi and would designate New Hampshire Ave NW between Virginia Ave NW and F St NW as “Jamal Khashoggi Way.”