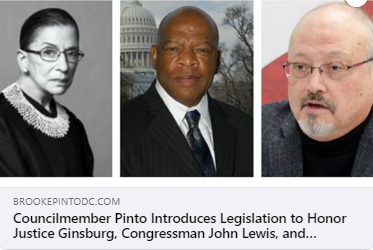 (WASHINGTON, D.C., 1/14/21) – Today, at 3:30 PM (ET), Democracy for the Arab World Now (DAWN), the Council on American-Islamic Relations (CAIR) and Code Pink will hold a virtual press conference in support of the introduction of the Jamal Khashoggi Way Designation Act of 2021 by the D.C. Council.

Introduced by D.C. Councilmember Brooke Pinto, the act seeks to rename the street in front of the Saudi Arabian Embassy in Washington, D.C., after Khashoggi and would designate New Hampshire Ave NW between Virginia Ave NW and F St NW as “Jamal Khashoggi Way.”

WHERE: The press conference will be livestreamed on the Facebook Pages:

QUESTIONS FROM THE MEDIA: Media questions may be entered into the comment section of the livestream on CAIR’s Facebook page or emailed in advance to Ayan Ajeen at aajeen@cair.com.

“Renaming the street in front of the Saudi Embassy in Washington, D.C., is not only important to honor Jamal Khashoggi’s legacy as a brave journalist who paid the ultimate price for his commitment to free expression, but it will also be a daily reminder for Saudi government officials that their heinous crimes will not be forgotten,” said Sarah Leah Whitson, DAWN’s executive director. “The Saudi government’s assault in murdering a Washington, D.C., resident was an assault on all of the people of this great city, founded on the principles of freedom and democracy.”

“Renaming the street in front of the U.S. Saudi Arabian Embassy ‘Jamal Khashoggi Way’ is a fitting tribute to a fearless democracy activist that could not be silenced – even in death – by his murderers. While many world leaders have sought to cover up or disregard this brutal murder orchestrated by Mohammed bin Salman, Khashoggi’s friends and supporters are committed to ensuring his legacy will not be forgotten,” said CAIR National Executive Director Nihad Awad. “The D.C. Council must not delay in passing this resolution to honor the memory of Khashoggi and in defiance of his murderers.”

“We are delighted that the DC Council is moving forward on naming the street in front of the Saudi Embassy “Jamal Khashoggi Way.” This not only honors the great journalist but all the residents of Washington DC who believe in free speech, justice and accountability,” said Medea Benjamin, Co-founder, CODEPINK for Peace.

“Chairman Mendelson should schedule a public hearing and bring the resolution up for a vote as soon as possible,” said Raed McCracken Jarrar, DAWN’s Advocacy Director.

Jamal Khashoggi’s brutal murder sparked worldwide outrage, including in Washington D.C., where Khashoggi worked as a columnist for the Washington Post and as Executive Director for DAWN.  Following his murder on October 2, 2018, activists in DC launched a petition to rename the street outside the Saudi Arabian Embassy after Mr. Khashoggi. Almost 10,000 people signed the petition. The Advisory Neighborhood Commission (ANC), where the Saudi Arabian Embassy is located, issued a resolution calling on the D.C. Council to rename the street. The effort did not succeed at the time because local law prohibits naming any public space after a person unless they are deceased for at least two years.

Jamal Khashoggi, a Washington Post columnist and resident of the Washington metropolitan area, was murdered by agents of the Government of Saudi Arabia in the Saudi Consulate in Istanbul, Turkey on October 2, 2018. His brutal murder sparked worldwide outrage, including here in the United States. The Central Intelligence Agency has concluded with high confidence that his murder was the result of a pre-planned and deliberate action, which was authorized and directed by Saudi Arabia’s Crown Prince Mohammed Bin Salman.

Renaming the street would uphold the recommendations of the United Nations, as reflected in Special Rapporteur Agnes Callamard’s investigation and report on the extrajudicial assassination of Jamal Khashoggi. Addressing the report’s findings, Callamard stated:

“The killing of Mr Khashoggi thus constitutes an international crime over which other States should claim universal jurisdiction. I call on those States to take the necessary measures to establish their competence to exercise jurisdiction under international law over this crime of extrajudicial execution.”