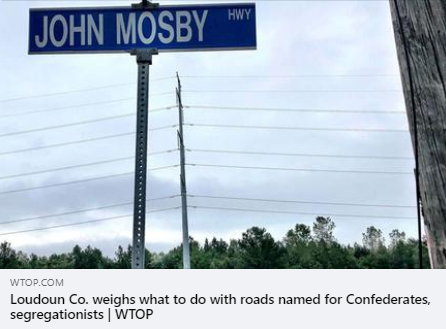 SEE: Loudoun Co. weighs what to do with roads named for Confederates, segregationists

In a meeting today (5 p.m. ET), the board will consider what steps to take on several roads named after Confederate and segregationist figures. An inventory under discussion includes roads named after Confederate generals Robert E. Lee, Thomas ‘Stonewall’ Jackson, and J.E.B Stuart. Also included on the inventory is a canoe and kayak launch facility named for George Kephart, a wealthy slave trader originally from the Belmont section of Loudoun County.

“Confederate traitors, racists and segregationists should be repudiated, not honored,” said CAIR National Communications Director Ibrahim Hooper. “The names of those who sought to uphold slavery, white supremacy and systemic anti-Black racism must be removed from places of honor if we wish to move beyond the divisive and destructive legacy of the Confederacy.”

Hooper added that CAIR supported a Virginia bill calling for the removal of the name of the president of the Confederacy from a highway in that state.