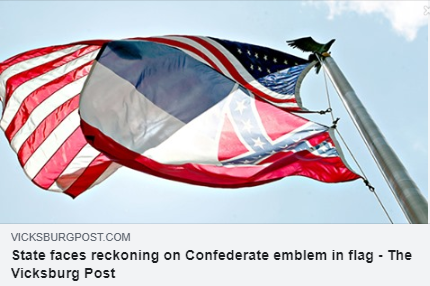 Mississippi is currently the only state flag that still incorporates the Confederate flag.

Recent anti-racism protests following the killing of George Floyd have resulted in the removal of Confederate statues, monuments and symbols nationwide. The U.S. Marine Corps recently banned all displays of the Confederate battle flag from its public spaces and work areas. NASCAR also banned the display of the flag.

“Mississippi should join the growing movement nationwide against Confederate symbols by removing this relic of racism and white supremacy from its state flag,” said CAIR National Communications Director Ibrahim Hooper.

He noted that CAIR and the American Muslim community are standing in solidarity with all those challenging anti-black racism.


Nihad Awad: In Solidarity with Our African-American Brothers and Sisters