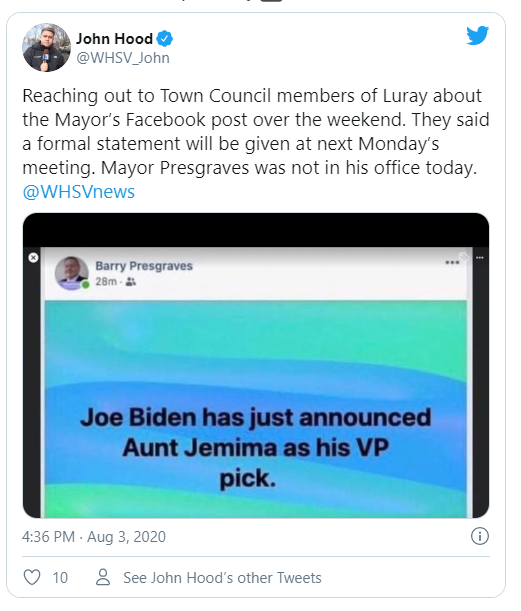 (WASHINGTON, D.C., 8/4/2020) – The Council on American-Islamic Relations (CAIR), the nation’s largest Muslim civil rights and advocacy organization, today joined calls for the resignation of a Virginia mayor who posted a racist and sexist comment online that “Joe Biden has just announced Aunt Jemima as his VP pick.”

[NOTE: The “Aunt Jemima” reference is a racist term used to describe a Black nursemaid during and after slavery.]

Luray, Va., Mayor Barry Presgraves has been in office since 2008, but has announced that he would not seek re-election in 2020. Joe Biden, the presumptive Democratic presidential nominee, has promised to choose a woman as his vice-presidential candidate.

SEE: Call for resignation of Virginia mayor after ‘Aunt Jemima’ post regarding Biden

“Public officials must conduct themselves in a manner that demonstrates to all members of the community that they are valued and respected,” said CAIR National Communications Director Ibrahim Hooper. “Mayor Presgraves should resign to open the way for a successor who can lead a diverse, multi-racial community.”

Hooper noted that the Town of Luray posted a statement on its Facebook page that read in part: “The Town of Luray rejects racism and is committed to working together with the community through understanding, compassion, and opportunity.”

The Town Council will discuss the issue at their August 10th meeting.”