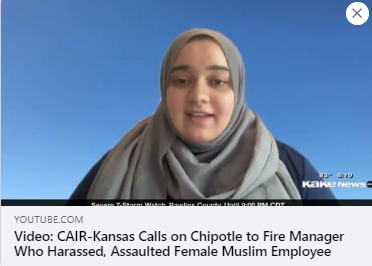 (KANSAS CITY, 8/28/2021) – The Kansas chapter of the Council on American-Islamic Relations (CAIR-Kansas) today said that Chipotle has fired an assistant manager at its Lenexa, Kan., location who reportedly subjected a female Muslim employee to harassment and assault by repeatedly demanding to “see her hair” and allegedly forcibly pulling her hijab (religious head-cover).

“We have a zero tolerance policy for discrimination of any kind and last week we terminated the employee in question following a thorough investigation. Chipotle’s engaged and hard-working employees are what makes us great, and we encourage our employees to contact us immediately, including through an anonymous 800 number, with any concerns so we can investigate and respond quickly to make things right.”

“We welcome the announcement of terminating the offending assistant manager by Chipotle, however we expect more cultural sensitivity training and tighter oversight of performance and implementation of policies to ensure that no other employee is subjected to this level of harassment and abuse,” said Moussa Elbayoumy, CAIR-Kansas Board Chair.

On Friday, CAIR-Kansas announced the filing of an U.S. Equal Employment Opportunity Commission (EEOC) on behalf of the Muslim Female employee.

Earlier this month, CAIR-Kansas called for the assistant manager to be fired.

Since July 2021, the Muslim employee allegedly experienced repeated harassment by an Assistant Manager asking to “see her hair” to which she responded that she wears the hijab for religious reasons and would not remove it. The assistant manager would allegedly repeat that same request while the employee continued working.