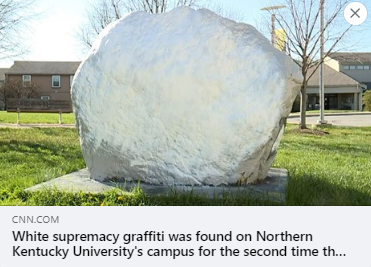 (WASHINGTON, D.C., 4/5/2021) – The Kentucky chapter of the Council on American-Islamic Relations (CAIR-Kentucky) today condemned racist graffiti found on Northern Kentucky University Campus for the second time since the beginning of the year.

The graffiti included spray-painted stencils of the words, “Patriot Front,” a White nationalist hate group that reportedly formed after the 2017 “Unite the Right Rally,” in Charlottesville, Va. The university will reportedly conduct a full investigation and increase nightly police patrols following the new graffiti.

“It is a moral obligation to speak out whenever anti-Black racism, white supremacy or other forms of bigotry are displayed in our state or nationwide. Racist groups must learn that they are rejected by the overwhelming majority of Americans.”

He noted that over the past year, CAIR has repeatedly spoken out against systemic anti-Black racism, white supremacy and anti-Asian hate crimes that have taken place across the nation amid the COVID-19 pandemic.