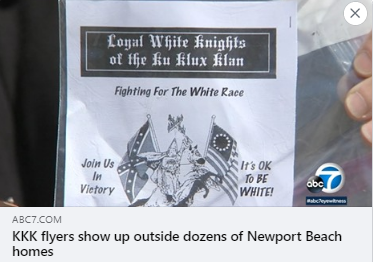 According to KABC/7, the flyers – placed in plastic bags and weighted with a rock – featured an image of a hooded figure riding a hooded horse, holding a burning cross, and were found outside homes Sunday morning. The flyer was titled “Loyal White knights of the ku klux klan,” with the subtitle “Fighting For The White Race.” The Newport Beach Police Department has initiated an investigation.

Two years ago, a photo taken at a local high school party in Newport Beach showing red plastic cups arranged in the shape of a swastika and students giving what appeared to be a Nazi salute.

“We strongly condemn the ideology of hatred and intolerance spread by the Ku Klux Klan. The flames of bigotry and intolerance are still burning bright in the hearts of some twisted individuals.

“These flyers show that hatred is continuing to spread through our cities, regardless of affluence or social standing. We will continue to stand up and defend our fellow community members in the face of hatred.”

He added that the American Muslim community and CAIR stand in solidarity with all those challenging anti-Black racism, xenophobia, Islamophobia, anti-Semitism, white supremacy and all other forms of bigotry.