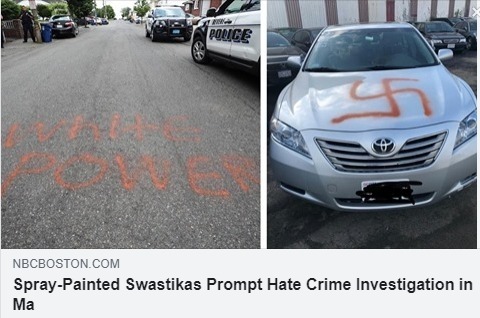 (BOSTON, MA, 7/1/20) – The Massachusetts chapter of the Council on American-Islamic Relations (CAIR-MA) today welcomed the arrest of a Revere man for the June 11 spray-painting of a Muslim woman’s car, which was covered on all four sides with huge Nazi swastikas.  In addition, “white power” was spray painted on the street.  CAIR-MA represents the victim, who wishes to remain anonymous.

“As you can imagine, my client is very happy and relieved by this news,” said CAIR-MA Civil Rights Director, Barbara J. Dougan. “She greatly appreciates the investigation that was done by the Revere police that led to an arrest, as well as the outpouring of support she has received from the community and even from total strangers.”

The Revere police notified the victim this morning that an arrest had been made.  The victim said her car has been vandalized before “but at least this time, someone was arrested.  I used to lie awake at night, worrying about my car.  Now I feel safer.”

CAIR-MA previously offered a $1,000 reward for information leading to the arrest and conviction of the perpetrator.