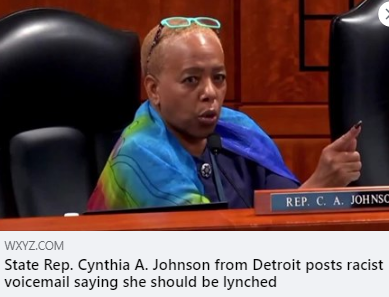 (CANTON, MI, 12/7/20) – The Michigan chapter of the Council on American-Islamic Relations (CAIR-MI) today called on state law enforcement to investigate a recent lynching threat against an African-American state representative from Detroit.

CAIR-MI is offering a $1,000 reward to anyone who contacts law enforcement authorities with information leading to an arrest and conviction in this case.

State Representative Cynthia Johnson recently received a series of harassing messages due to her questioning last Wednesday of the Trump campaign’s bid in front of the Michigan House Oversight Committee to overturn recent presidential election results in the state.

One threat against Johnson stated, “You should be swinging from a f***ing rope you Democrat” and referred to her as a “big-lip n******.”

“We call on state law enforcement authorities to probe the recent racist harassment against Rep. Johnson as a crime under the state’s ethnic intimidation law,” said CAIR-MI Executive Director Dawud Walid. “Given the gruesome history of lynching of African-Americans in our country, a strong response is warranted in this matter to deter future threats against lawmakers in our state and nationwide.”