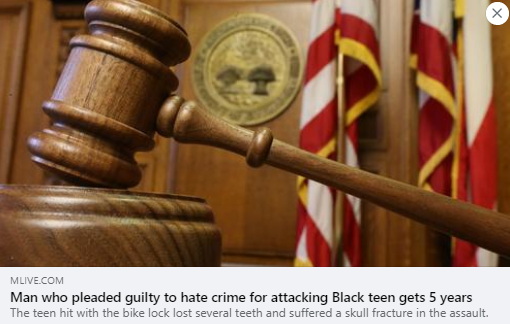 (CANTON, MI, 7/9/2021) – The Michigan chapter of Council on American-Islamic Relations (CAIR-MI), a chapter of the nation’s largest Muslim civil rights and advocacy organization, today welcomed the sentencing of a man who pleaded guilty to a hate crime in a brutal attack targeting two Black teens at a local beach but decried the five-year sentence as being too lenient given the seriousness of the attack.

In the summer of 2020, a white man visiting a beach in Monroe County, Mich., with his family became enraged at two black youth enjoying their summer vacation at the same beach. The man approached the two young men and showered them in a flurry of racially motivated slurs and expletives telling them that they did not belong on the beach. After verbally assaulting the youth, he retrieved a bike lock from his vehicle and physically assaulted one of the African American youths.

The victims in this case were children merely enjoying a day at the beach and their lives were altered by a vicious racist outburst and physical assault that left one teen with a fractured skull and missing teeth. Witnesses on the scene stated that during the entire assault the assailant shouted racial slurs and stated that “black lives don’t matter.”

The assailant pled guilty in March 2021 of violating the Federal Hate Crime Statute and was today sentenced to five (5) years in federal prison for the attack.

“Given the violent nature of the assault, the injuries suffered by the victim and the youthful nature of the victims in this case, we are concerned about such a light sentence.

“The Federal Hate Crime Statute is intended to be a deterrent for the types of activities engaged in by the assailant in this case and was intended to be an enhancement on the sentence for the actual assault.

“The fact that the perpetrator of such a vicious attack fueled by racist animus was given only five years and was not charged with the aggravated assault of the victims in this case, is a miscarriage of justice and will not serve as a deterrent to those hateful bigots who may be inclined to act in a similar manner as the assailant did last summer.”