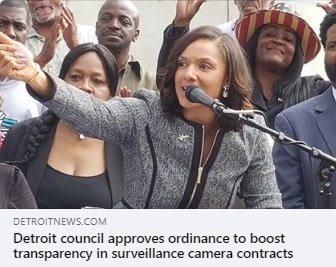 (CANTON, MI, 5/26/21) – The Michigan chapter of Council on American-Islamic Relations (CAIR-MI), a chapter of the nation’s largest Muslim civil rights and advocacy organization, today welcomed the approval of an ordinance by the Detroit City Council that provides greater transparency and oversight regarding surveillance cameras used by that city’s government.

The Detroit City Council yesterday unanimously passed the Community Input Over Government Surveillance Ordinance (CIOGS), which will provide annual reports to be given by the Detroit Police Department (DPD) to city council and to the public regarding the types of technologies being used to surveille persons within Detroit, greater oversight for council in making decisions to approve funding for such technologies and whistleblower protections for city employees to report their misusage.

“After years of joining our community partners in speaking before Detroit City Council and the police department, we are pleased that CIOGS has finally passed and will give citizens greater say as to how surveillance technologies — including Project Green Light facial recognition technology — are used in the city,” said CAIR-MI Executive Director Dawud Walid.  “We will continue to advocate for the ending of current facial recognition technologies, which have been used to investigate and arrest innocent persons and inherently confuses the identities of Black people in particular.”

Walid also stated that concerns still exist about how DPD currently uses facial recognition technology near some Islamic centers in which footage could be accessed by federal law enforcement to ascertain the frequency in which persons enter those houses of worship. DPD remains a part of a multi-jurisdictional task force which includes agencies such as the FBI that has a track record of overly surveilling Michigan Muslims since 9/11.