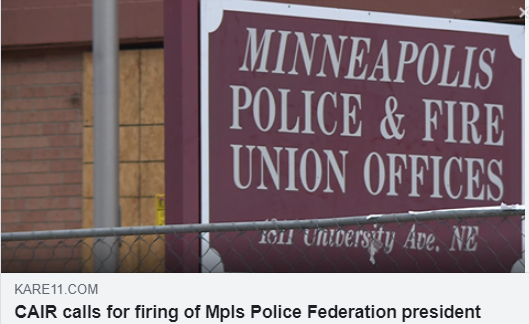 (MINNEAPOLIS, MN, 8/21/20) – Later today, the Minnesota chapter of the
Council on American-Islamic Relations (CAIR-MN) will join a coalition of local and national civil rights, racial justice, and police accountability organizations at a press conference to demand the firing of Minneapolis Police Federation President Bob Kroll.

The groups will deliver more than 250,000 petition signatures calling on Mayor Jacob Frey, Minneapolis City Council members and Police Chief Medaria Arradondo to denounce Kroll and push for his removal as president of the Minneapolis police union.

WHAT: Press Conference calling for the firing of Bob Kroll

“We call for the firing of Bob Kroll, a man who has repeatedly supported killer cops. He must recognize and be held accountable for his unjust and immensely harmful actions. The first step toward change within the Minneapolis Police Department starts with firing Kroll,” said CAIR-MN Executive Director Jaylani Hussein.

“Bob Kroll represents everything that is wrong with policing in Minneapolis and the police union. He has a history of engaging in extreme violence on and off duty. He has had dozens of misconduct complaints filed against him and multiple lawsuits; and yet he has been disciplined very few times. He has assaulted numerous civilians over the years, including a 15-year-old bi-racial boy that he kicked in the face. And he condones the behavior of killer cops. It’s time for him to go,” said Nekima Levy Armstrong, civil rights attorney and founder, Racial Justice Network

“Over the past few months, we’ve heard a cry for justice for the killings of Breonna Taylor, George Floyd, and countless other Black victims of police violence. But time and time again police unions and their leaders like Minneapolis’s Bob Kroll have stood as an enemy to meaningful reform, including policies like civilian review, that will protect Black lives,” said Scott Roberts, Senior Director of Criminal Justice Campaigns at Color Of Change. “Kroll is not just an enemy to reform, he has advocated for the fundamentally racist belief that Black lives do not matter including a 2007 racial discrimination lawsuit when he called Keith Ellison a “terrorist” and wore a white supremacist group’s patch. He has admitted to having over 50 complaints filed against him, continuing to highlight corruption in the ranks of the MN police department. Simply put, Mr. Kroll poses a threat to Black lives and we’re joining the thousands of Americans calling for his resignation.”

“Bob Kroll has made clear through his statements and actions that he subscribes to a school of thought too common in police unions across the country – that they should be able to operate with impunity, that they’re above accountability, and that they should be able to police Black people and Black lives however they see fit, despite a track record that reeks of othering, racism, and discrimination,” said James Rucker, co-founder of Police Unions Exposed. “Minneapolis can’t move forward with the reforms its citizens are rightfully demanding – and that are long overdue – as long as people like Bob Kroll are gatekeepers for the process.”