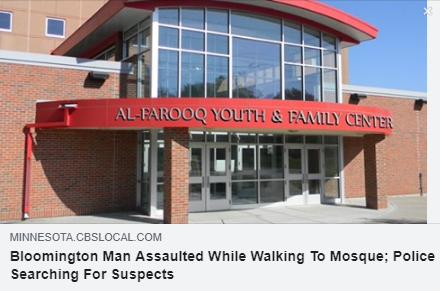 (MINNEAPOLIS, MN, 8/7/20) – The Minnesota chapter of the Council on American-Islamic Relations (CAIR-Minnesota) today called on public and law enforcement officials in Bloomington, Minn., to investigate the possibility of a bias motive for an assault on a 50-year-old Muslim man outside the Dar Al-Farooq Islamic Center in Bloomington, Minn., Thursday night.

The victim was reportedly walking to Dar Al-Farooq when two people described as being in their late teens or early twenties approached and assaulted him, according to police. The victim suffered a non-life-threatening injury and was transported to Fairview Southdale Hospital.

“We are thankful that the assault victim did not suffer life-threatening injuries. We urge public officials to uncover the motivation behind the assault and to take concrete steps to ensure that Muslim and minority communities will be safe from such attacks in the future,” said CAIR-MN Executive Director Jaylani Hussein.