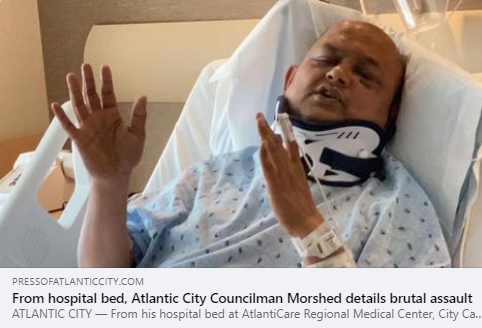 Atlantic City 4th Ward Councilman MD Morshed was attacked last Thursday during a drug deal near Al Hera Mosque. Morshed allegedly came into an altercation with the drug users in the parking lot after the evening prayer.

Morshed, 47, said he was feeling better, but he suffered a broken nose and broken eye socket and his neck is in pain. He was scheduled to have surgery Monday morning to repair the broken bones.

SEE: Atlantic City Councilman Morshed To Say He “Was Targeted”

“We are deeply concerned by and condemn the brutal attack on Councilman Morshed. For this attack to have taken place next to the mosque that local Muslims frequent for daily worship—including in the early morning and late evening—is especially alarming and should be taken seriously by local officials. An investigation led by the Attorney General’s office is necessary to learn more about the violent assault and those who attacked the councilman.

“More needs to be done to ensure public safety around Al Hera mosque and Atlantic City, but we know very well that more policing and incarceration will not bring an end to violent crimes or substance misuse. A creative solution that seeks to keep congregants safe but is mindful of the harm brought by over-policing is necessary to ensure the overall wellbeing of the neighborhood.

“Proactive measures to help those suffering from substance use disorder are necessary to combat the nation-wide pandemic. Atlantic City officials must center the work of community-based prevention programs to help bring an end to the struggle. Non-investment in community based public safety that supports the most vulnerable will lead to a rise in more crimes like the one faced by Councilman Morshed.”