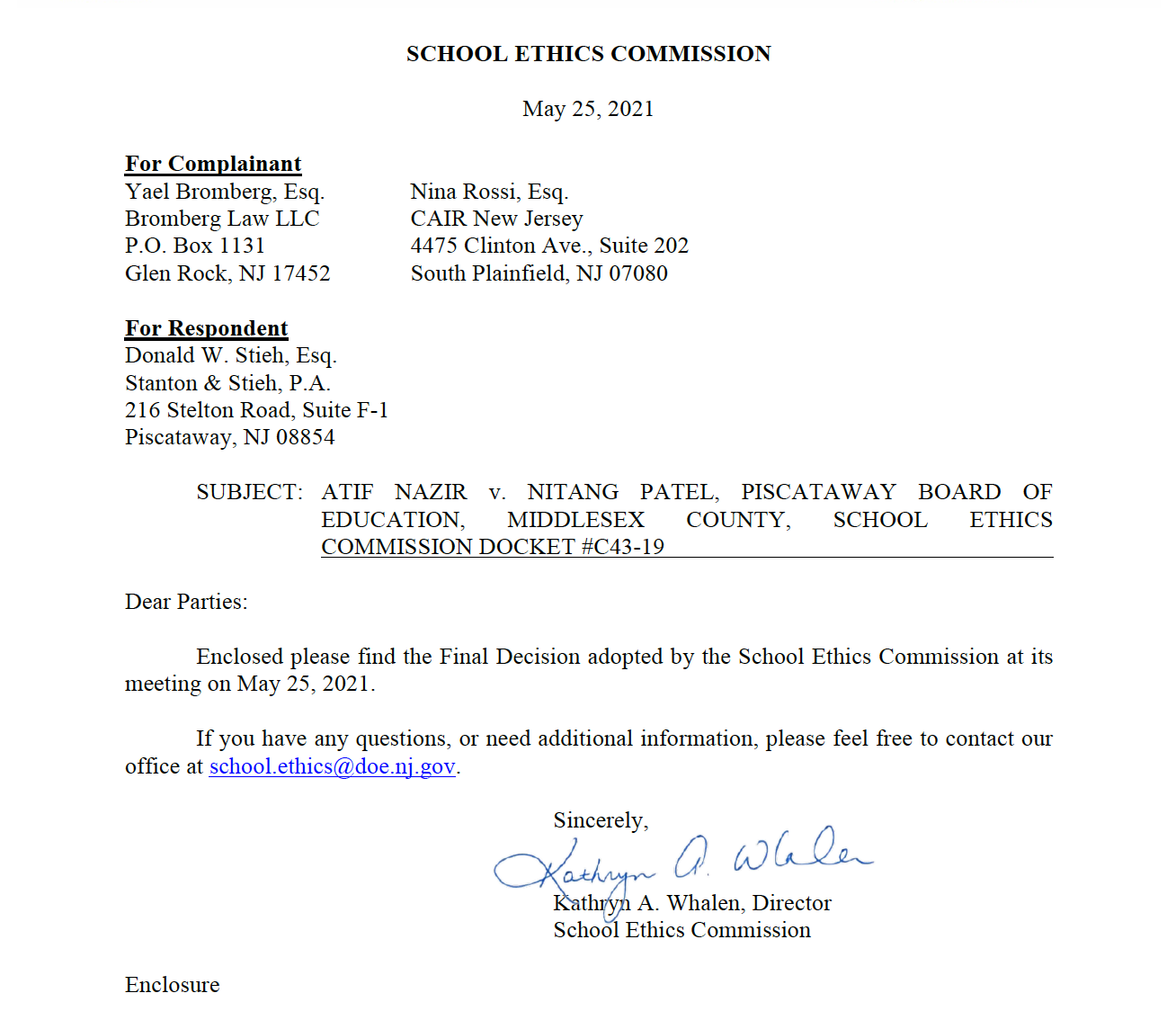 In June 2019, a flyer was distributed to predominantly Indian-American households of Hindu faith. The flyer was signed by three prominent Indian-American residents — none of them Muslim — promoting candidates who were running in the primary for County Committee.

The language used against their opponents from the Central Jersey Progressive Democrats named Dr. Atif Nazir, an outspoken and admired Muslim former school board member, and called the opposing slate “a radical group under the leadership of Atif Nazir that wants to take over our township government. We cannot let that happen.”

CAIR-NJ and Bromberg Law LLC filed a Complaint under the School Ethics Act against Patel alleging violations of three provisions of the Code of Ethics for school board members.

The New Jersey School Ethics Commission issued its final decision on May 25, 2021. The Commission recommends a penalty of censure for Patel having violated multiple provisions of the Code (see page 17).

SEE: Anti-Muslim memes have no place in our politics | Editorial

“The administrative law judge who issued the initial decision ignored relevant evidence that was presented at the hearing. He found only one violation of the Code of Ethics. The School Ethics Commission, after an independent review of the evidence, found three Code violations: that Patel’s actions had the potential to compromise the Board, that Patel surrendered his independent judgment to a partisan political group and that Patel endorsed a flyer that contained inaccurate information about Atif Nazir.

“The Ethics Commission also increased the penalty from the Reprimand imposed by the ALJ to a Censure. Its reasoning was that Patel committed multiple violations of the School Ethics Act and there is a need to publicly admonish school officials who fail to act in accordance with the act.”

“We welcome the School Ethics Commission’s decision to censure Mr. Patel. Inflammatory rhetoric stoking anti-Muslim sentiment for political gain should never serve as the base of a political campaign. Vilifying Muslims in the political area is unfortunately an all-to-common tactic that should never be tolerated.”