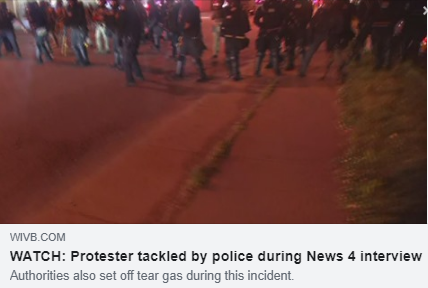 (NEW YORK, N.Y. 6/4/20) – On Friday, June 5, the New York chapter of the Council on American-Islamic Relations (CAIR-NY), a chapter of the nation’s largest Muslim civil rights and advocacy organization, will hold a press conference regarding the arrest of a peaceful protester during a media interview on Monday evening at Bailey Avenue.

On Monday evening in Buffalo, N.Y., Miles Carter was speaking with a local television reporter during a peaceful demonstration. With his hands in the air and back to the police and without any notice, police in riot gear rushed forward, grabbed him and threw him to the ground. Police arrested Carter on two baseless charges. The City of Buffalo had not issued a curfew for Monday evening. Carter was released early Tuesday morning.

WHAT: Press Conference Regarding Unlawful Arrest of Peaceful Protester

WHO: Myles Carter and Other Community Activists

Monday’s incident quickly went viral. In response, a community-led fundraiser has been created to support Mr. Carter and other protesters. SEE: http://launchgood.com/myleslegalaid.

Carter has been a community advocate for years and has contributed to the City of Buffalo by helping to raise over $120,000 to build a state-of-the-art playground and dedicating time to assist in the build out of a domestic violence shelter that serves the east side of Buffalo.

He is a father of 5, a black business owner, a native of Buffalo, a graduate of Medaille College and has served as a mosque liaison to the Buffalo Police Department C-District.

“Protesters have a fundamental right to protest against abusive police practices. It is unacceptable for law enforcement to respond to peaceful protests with aggressive tactics and excessive use of force.

“Miles Carter was conducting a media interview with his hands in the air and his back turned away from the police when he was viciously grabbed, slammed to the ground by the officers, and unlawful arrested. Mr. Carter’s courage to speak out is indicative of his commitment to his community and justice.