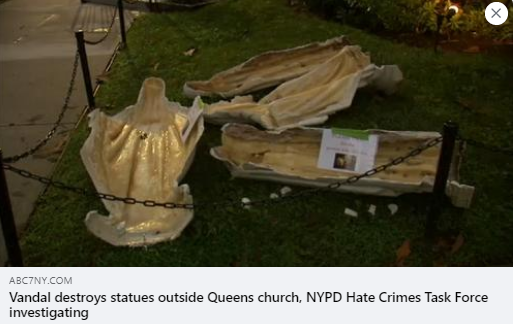 (NEW YORK, NY, 7/19/2021) — The New York chapter of the Council on American-Islamic Relations (CAIR-NY), the nation’s largest Muslim civil rights and advocacy organization, today condemned the vandalism committed against the Our Lady of Mercy Roman Catholic Church in Queens on Saturday, July 17, 2021.

This act of vandalism is currently being investigated as a possible bias incident by the NYPD Hate Crimes Task Force.

A security camera caught the image of an unidentified woman—who appears to be in her 20s— repeatedly smashing statues outside of the church on Kessel Street in Forest Hills. A retired pastor who was in the rectory around heard the disturbance and reported the incident.

Reverend Frank Schwarz said, “She appeared to have some kind of a hammer or something and she was stomping on the statues hammering them and just completely demolished them.”

According to the Diocese of Brooklyn, the vandalized statues that depicted the Blessed Mother and St. Therese the Little Flower had been erected outside of the church since 1937. On the previous Wednesday, someone fitting the same description as the woman had pushed the statues over; however, they did not break in that instance.

In a statement regarding this hate crime, CAIR-NY Executive Director Afaf Nasher said:

“An act of vandalism committed against a holy place of worship is absolutely unacceptable and appalling. CAIR-NY stands in solidarity with the Christian community and denounces all forms of hate crimes targeting any religious institution or faith. The suspect must be brought to justice.”