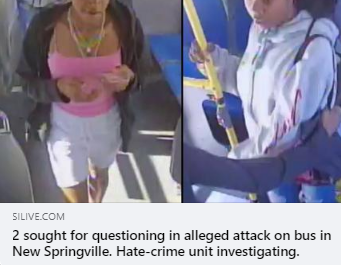 (NEW YORK, NY, 6/19/2022)—The New York chapter of the Council on American-Islamic Relations (CAIR-NY) today condemned an alleged assault on two Asian American teenage girls by two suspects who spewed anti-Asian insults, then reportedly slapped them and pulled their hair.

The alleged assault against the teenage girls in Staten Island occurred on the morning of April 8 on the S61 bus line. The suspects eventually fled the bus near the Richmond Hill Road stop. The victims were taken to the hospital and found to be in stable condition.

CAIR-NY also welcomed the arrest of a Florida woman who allegedly shouted abusive, racist insults at four Asian American women before pepper-spraying them as they sat enjoying a Saturday evening in Manhattan’s Chelsea neighborhood.

Afaf Nasher, Executive Director of CAIR-NY, said in a statement:

“CAIR-NY condemns the continued vicious, racist attacks targeting the Asian American community. We empathize with the teenage girls who perhaps will never forget the cruelty and enmity of the reported assault they experienced. And we are relieved that the assailant who allegedly pepper- sprayed the women in Chelsea has been caught and charged with a hate crime.

“To be victimized for no reason other than your ethnicity is especially traumatic. We commend the NYPD for their work in both of these apparent hate crimes and look forward to a prompt and just resolution for each.”

She added that CAIR-NY and the American Muslim community stand in solidarity with all those challenging white supremacy, anti-Jewish hate, anti-Black racism, xenophobia, Islamophobia, and all other forms of bigotry.

Anyone with information about this incident should call the NYPD’s Crime Stoppers Hotline at 1-800-577-TIPS (English) or 1-888-57-PISTA (Spanish).

Do you like reading CAIR-NY’s press releases and taking part in our action alerts? You can help contribute to CAIR-NY’s work of defending civil rights and empowering American Muslims across the country by making a one-time contribution or becoming a monthly donor. Supporters like you make CAIR-NY’s advocacy work possible and defeating Islamophobia an achievable goal. Click here to donate to CAIR-NY.