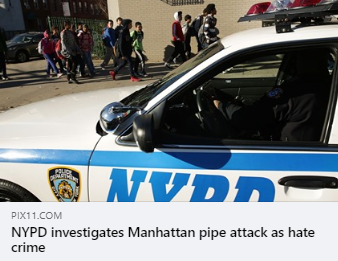 According to reports, on March 7, an individual viciously hit a 28-year-old man with a pipe in Lower Manhattan on Saturday night after saying, “F—k you, Mexican.” The assault happened on Broadway near Cortlandt Street around 8:30 p.m. after the attacker hurled the racial slur at the victim.

The victim suffered a large laceration to his head and was taken to an area hospital for treatment. The incident is being investigated as a hate crime, an NYPD official said Sunday. According to police, no arrests had been made.

“Racist and violent behavior targeting any American is abhorrent and must be repudiated by state and national leaders. Our society must push back against the growing bigotry we are witnessing nationwide that leads to such racist and xenophobic behavior.”

He noted that last week, CAIR condemned the mocking of a Maryland councilwoman’s accent during a virtual zoom meeting Tuesday on how the COVID-19 vaccine rollout had failed communities of color in her county.

Washington, D.C. based CAIR and the American Muslim community are standing in solidarity with all those challenging anti-Black racism, xenophobia, Islamophobia, anti-Semitism, and white supremacy.