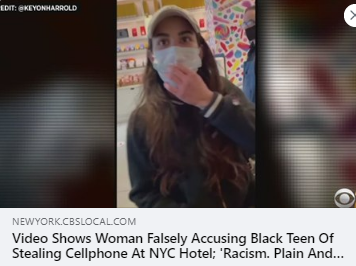 According to reports, on December 26, a woman falsely accused a Black teen of stealing her iPhone at the Arlo Hotel located in SoHo. The teenager’s father, Keyon Harrold Sr., alleged that the woman tackled his 14-year-old son, Keyon Harrold Jr. Harrold Sr. is a Grammy award winning jazz musician.

After the incident, an Uber driver found and returned the woman’s phone to the hotel. ‎

In a video, Harrold Sr. stated he suffered an injured to his hand while trying to protect his son during the assault.

“This is anti-Black racism, and it is horrifying to watch this incident and to learn that hotel staff aided and abetted this racist assault. This woman assaulted and endangered a child in broad daylight. It is unacceptable, and the Manhattan district attorney needs to send a message that this behavior will not be tolerated in our city.”