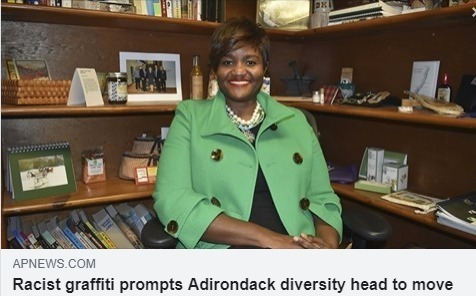 (NEW YORK, N.Y., 7/9/2020) – The New York chapter of the Council on American-Islamic Relations (CAIR-NY), a chapter of the nation’s largest Muslim civil rights and advocacy organization, today condemned racist graffiti on a bridge in the small village of Saranac Lake, N.Y. The incident has prompted Governor Andrew Cuomo to deploy the State Police Hate Crimes Task Force to investigate.

The racist, anti-Black graffiti included slurs, expletives, and read “Go Back to Africa.” Nicky Hylton-Patterson, who moved to Saranac Lake in 2019 to assume a position as head of the Adirondack Regional Diversity Program, is now moving to an undisclosed location due to the fear and intimidation this racist display provoked.

CAIR-NY continues to combat hate wherever it exists.

CAIR recently unveiled a Black Lives Matter banner containing the names of hundreds of victims of racist police violence, including George Floyd, on its Capitol Hill headquarters in Washington, D.C.

To report a hate crime or bias-incident/discrimination to CAIR-NY, fill out an incident report at www.cair-ny.org/incident-report.