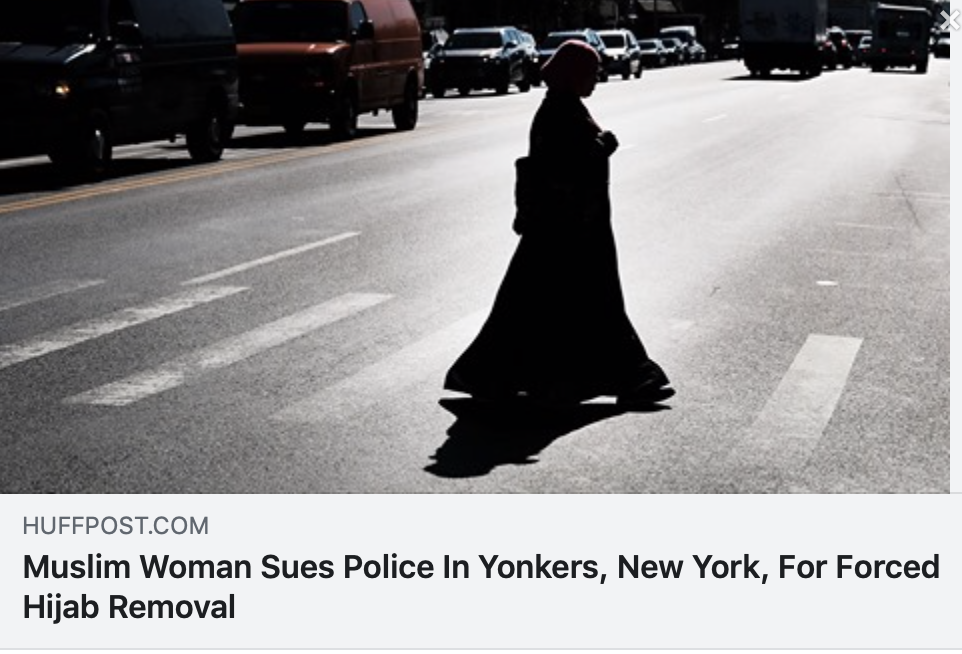 (NEW YORK, NY, 4/8/2020) – The New York chapter of the Council on American-Islamic Relations (CAIR-NY), the nation’s largest Muslim civil rights and advocacy organization, and the law firm of Emery Celli Brinckerhoff & Abady LLP (ECBA), a leading civil rights firm, today filed a class action civil rights lawsuit in federal court seeking an injunction to block the City of Yonkers from removing arrestees’ religious head coverings (like hijabs) for their booking photos and while in custody.

CAIR-NY and ECBA filed the lawsuit this morning in the U.S. District Court for the Southern District of New York alleging that the City of Yonkers’ photograph policy violates the New York State Constitution, the First Amendment to the U.S. Constitution and the Religious Land Use and Institutionalized Persons Act (RLUIPA).

In 2018, CAIR-NY and ECBA filed a similar class action lawsuit against the NYPD for its photograph policy.  That lawsuit remains pending in federal court.

In a statement, the CAIR-NY Litigation Director, Ahmed Mohamed, said: “It is unacceptable that the City of Yonkers would cling to a policy that degrades and humiliates Muslim women, and others, by forcing them to remove their head covering against their sincerely held religious beliefs. This policy is illegal. Ms. Malkawi should be applauded for her courage to step forward and fight this unjust policy that has caused her and many others unimaginable pain and suffering.”

“The Yonkers policy is out of step with the Constitution, federal law, and a growing consensus of national law departments that all respect people’s rights to wear religious head covering,” said Andrew Wilson, of Emery Celli Brinckerhoff & Abady LLP, one of the attorneys for the plaintiff.

“There is no legitimate need for law enforcement to remove religious head coverings for mug shots or any other purpose,” said ECBA attorney Emma L. Freeman.  “In 2020, the state should not be coercing people in its custody to violate their religious beliefs.”

“This is important for me and for every Muslim. I want our voice to be heard,” said plaintiff Ihsan Malkawi. “I hope this will never happen to any sister.”

According to the complaint, Plaintiff Ihsan Malkawi is a practicing Muslim-American woman that wears hijab.  After Malkawi was arrested, on false allegations, the Yonkers Police Department (YPD) forced her to remove her hijab against her will while she plead with officers not to remove her hijab.  After YPD officers coerced her to remove her hijab for the official mug shot, Malkawi endured a full day and night without her hijab, was photographed a second time, paraded, bare-headed, past multiple male YPD officers, and detained in a holding cell visible to male inmates. The following day, Malkawi was brought, without her hijab, to a public courtroom filled with strangers for her arraignment. After the court appearance, she was taken to the county jail. Malkawi spent 36 hours in YPD custody without her hijab.

Emery Celli Brinckerhoff & Abady LLP is a litigation boutique that focuses on civil rights, commercial, criminal, and ethics matters. ECBA represents individuals, businesses, and institutions in all aspects of litigation and pre-litigation dispute resolution, from negotiation, mediation and arbitration, through hearings, trials, and appeals. More about their practice can be found at www.ecbalaw.com.

CAIR-New York is a chapter of America’s largest Muslim civil liberties and advocacy organization. Its mission is to enhance the understanding of Islam, encourage dialogue, protect civil liberties, empower American Muslims, and build coalitions that promote justice and mutual understanding.