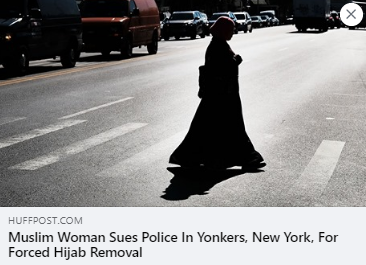 That policy forced arrestees to remove hijabs (Islamic head scarves) and other religious attire for mug shots and while in custody. As part of the settlement, the City of Yonkers agreed to pay $175,000 in damages, which may be the largest-ever settlement in such cases.

“The policy changes we have obtained from the City of Yonkers will bring an end to itsdiscriminatory practice of forcing Muslim women to remove their hijabs in violation of their religious principles. This policy is long overdue, and we hope this settlement will give other law enforcement agencies around the state an incentive to correct their policies and respect a Muslim woman’s right to her hijab.”

CAIR-NY and ECBAWM filed the lawsuit against Yonkers Police Department (YPD) on April 8, 2020, after Ihsan Malkawi, a practicing Muslim woman, was forced to remove her hijab for a mug shot and endured 36 hours in YPD custody without her hijab.

The Settlement will bring YPD in line with municipalities across the country that allow arrestees to retain their religious head coverings during custody. As part of the Settlement, YPD will also develop and implement trainings to ensure proper implementation of the new policy. Over the next three years, YPD will report the number of arrestees whose religious head coverings were removed to CAIR-NY and ECBAWM as part of the enforcement of the Agreement.

In 2018, CAIR-NY and ECBA filed a similar class action lawsuit against the NYPD for its photograph policy.  That lawsuit remains pending in federal court.

In November 2020, the NYPD agreed to end their discriminatory “hijab removal” policy.

SEE: N.Y.P.D. Will No Longer Force Women to Remove Hijabs for Mug Shots