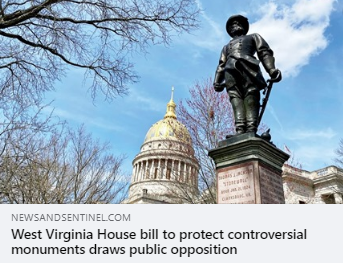 (WASHINGTON, D.C., 3/19/2021) – The Council on American-Islamic Relations (CAIR), the nation’s largest Muslim civil liberties and advocacy organization, today condemned a bill introduced in the West Virginia legislature that would prevent the removal of Confederate monuments.

Earlier this week, that state’s House of Delegates Government Organization Committee passed the “West Virginia Monument and Protection Act of 2021.” House Bill 2174 would block the removal of monuments unless the West Virginia State Historic Preservation Office grants a waiver. The bill is apparently in response to efforts across the country to remove Confederate monuments.

SEE: As a bill to protect Confederate monuments advances in West Virginia, a bill to ban Black hair discrimination stalls

Waste of Time: Glorifying Confederacy does not help West Virginia

“Monuments honoring the traitors, racists and white supremacists of the Confederacy should be removed, not protected,” said CAIR Director of Government Affairs Robert McCaw.

He added that yesterday, CAIR condemned as “pro-Confederate” a new bill in the Tennessee Senate that would replace every member of a state board that voted to remove a bust of Confederate general and early leader of the Ku Klux Klan, Nathan Bedford Forrest, from the State Capitol.

McCaw noted that CAIR has repeatedly urged the removal of Confederate holidays, symbols and racist laws.