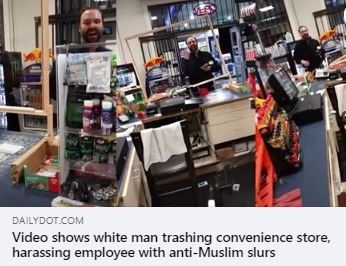 (PORTLAND, OREGON, 1/25/2021) – The Oregon chapter of the Council on American-Islamic Relations (CAIR-Oregon) today called for hate crimes charges to be considered after a 43-year-Made “old white man was caught on video yelling a string of anti-Muslim slurs and throwing items at the 68-year-old Afghan man at a Portland, Ore., gas station store.

Authorities have identified Brian Christopher Miller as the suspect. The video shows the man, identified by police as Miller, say, “Is that how we do things in America Afghan, Al-Qaeda, Osama, huh, is it?” The worker told Portland police that the suspect threatened to come back and kill him.

Police arrested Miller on suspicion of first-degree criminal mischief and third-degree robbery. He was later released on his own recognizance.

“It is unconscionable that a suspect in an apparent and violent hate crime has not been charged accordingly. The Multnomah County District Attorney’s office must correctly address the charges against the suspect to reflect the hate crime laws that have just newly been instituted in our state. Without proper accounting of these acts, this state will never begin to heal from its dark past.”

Last week, CAIR’s New York chapter called for hate crime charges after a man allegedly harassed a Muslim due to his religious identity.