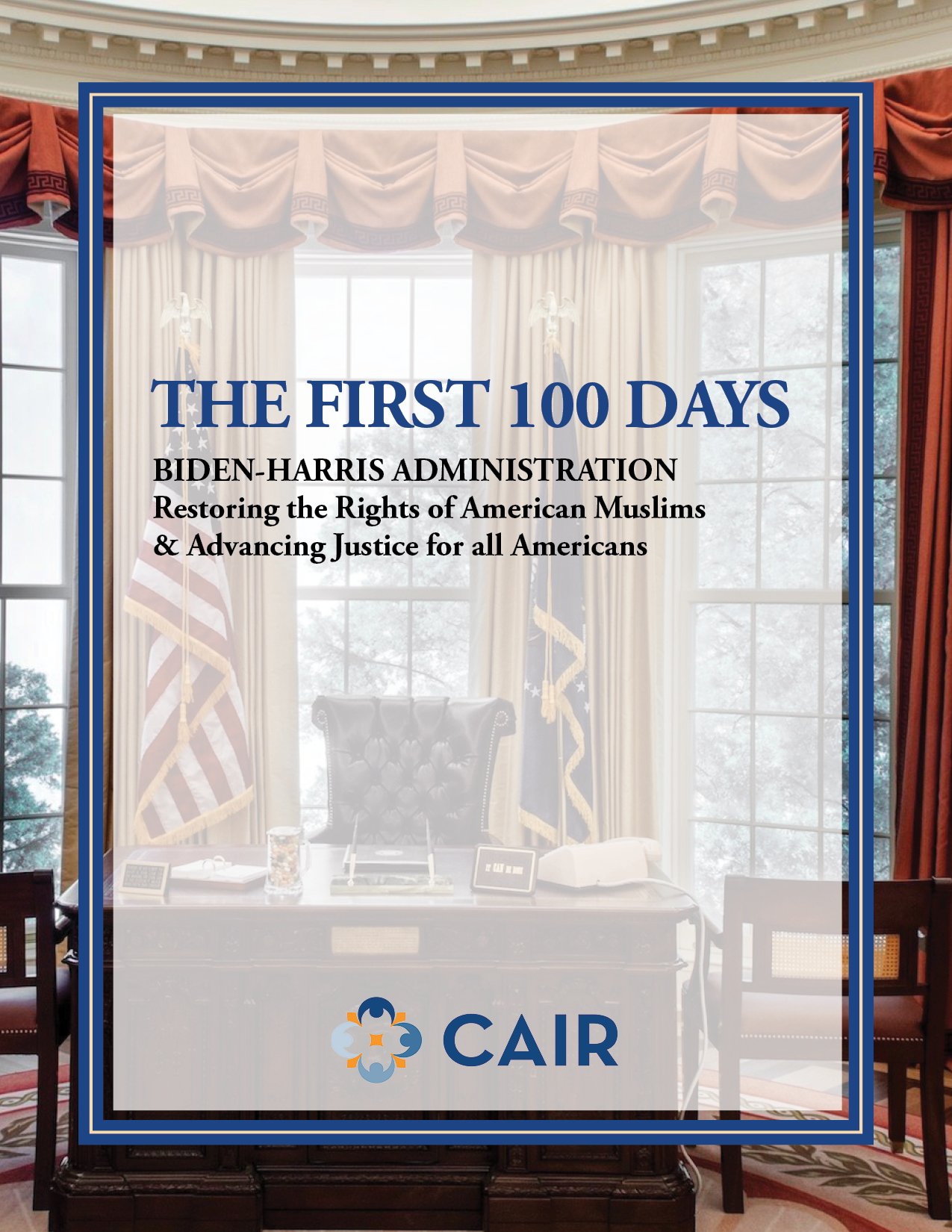 (WASHINGTON, D.C., 12/22/2020) – The Council on American-Islamic Relations (CAIR), the nation’s largest Muslim civil rights and advocacy organization, today publicly released a detailed agenda detailing policy changes that the Biden-Harris administration should pursue within its first 100 days in office to restore the rights of Americans Muslims and advance justice for all.

The report identifies 33 new initiatives and policy reforms designed to protect and respect the rights of all U.S. citizens and residents, including Muslims, that the new administration can start to implement the first day in office.

CAIR’s agenda is being endorsed by the U.S. Council of Muslim Organizations, the largest coalition of several leading national, regional, and local Muslim organizations and institutions harnessing the collective strength of American Muslims for the greater good of all.

READ CAIR’s Report: The First 100 Days – Biden-Harris Administration – Restoring the Rights of American Muslims and Advancing Justice for all Americans

“CAIR believes that the Biden-Harris administration presents our nation with an opportunity not only to undo the damage caused by prior administrations – including policies and programs that led to the discriminatory profiling and targeting of American Muslims by state and federal law enforcement – but to adopt new initiatives that protect and respect the rights of everyone in our nation, including American Muslims.”

CAIR welcomes the incoming Biden-Harris administration’s pledge to end the Muslim Ban on day one, include Muslims at every level of his administration and address issues of racial and religious discrimination. CAIR plans to join other American Muslim leaders and organizations in ensuring that the new administration fulfills these promises.

In addition to these pledges, CAIR is calling on the new administration to implement — in its first 100 days — a progressive civil rights agenda that starts with the repeal of the Muslim Ban and then pushes forward to authorize and begin the process of carrying out the following civil rights reforms:

1. Fundamentally reform the federal government’s unconstitutional Terrorist Screening Database (TSDB), commonly referred to as the “terrorism watchlist.”
2. Dismantle the TSA’s secretive Quiet Skies passenger tracking program, its international counterpart Silent Partner and other rules-based lists, that operate without Congressional oversight to single out law-abiding Muslim travelers for official harassment and extrajudicial consequences without due process.
3. Oppose and defund the U.S. Department of Homeland Security’s (“DHS”) 2020 “Targeted Violence and Terrorism Prevention” (“TVTP”) grant program, the successor of DHS’s previous Countering Violent Extremism (“CVE”) grant program.
4. End the FBI’s use of informants to spy on American Muslim communities.
5. Reject any new domestic terrorism statutes.
6. Close the U.S. military prison at Guantanamo Bay, Cuba and ensure those detainees already cleared for release are repatriated, and those that remain in U.S. custody are provided due process and a day in court.

7. Fulfill commitment to revoke the Muslim and Africa travel ban executive orders and related proclamations on day-one in office.
8. Work with Congress to adopt the NO BAN Act.
9. Repair the damage done by the Trump administration to the U.S. immigration system by reversing restrictions on the ability to travel and immigrate to the United States.
10. Work with Congress to repeal the Visa Waiver Program (VWP) Improvement and Terrorist Travel Prevention Act of 2015, re-evaluate all countries currently designated by the federal government under the VWP, and end all other discriminatory anti-Muslim “extreme vetting programs.”
11. Restore and enhance protections for asylum seekers and refugees, halt the detention of asylum seekers and other abusive practices, invest in refugee resettlement programs, and invest in humane alternatives to detention of asylum seekers and refugees.

12. Work with Congress to adopt and pass the George Floyd Justice in Policing Act while also adopting many of the act’s provisions through administrative action
13. Remove discriminatory loopholes in federal guidance regarding the use of racial and religious profiling by federal law enforcement agencies.
14. Create a centralized database that documents excessive use of force by law enforcement.
15. Require equal treatment of the American Muslim community by federal law enforcement and the criminal justice system.
16. Combat anti-Black and anti-people of color racism in policing by working to reduce and reinvest significant portions of federal funding for the DOJ, FBI and DHS, as well as grants for local police department programs, into resources for underfunded and overpoliced communities of color, among other policies.

17. Support the free speech of all Americans and the right to boycott without government interference. 18. Support federal and state departments of education efforts to adopt policy reforms to address religious based bullying in schools.
19. End the U.S. Department of Education’s attempts to suppress free speech on college campuses, including attempts to target Middle Eastern studies courses and punishing Palestinian student activists.

20. Work with Congress to fundamentally reform the Prison Litigation Reform Act (PLRA) to ensure incarcerees’ constitutional right to equal access to the courts.

21. Ensure American Muslims and other minorities, like all other Americans, have equal access to the COVID-19 vaccine and federal and state aid available to those impacted by the COVID-19 crisis.
22. Request the U.S. Department of Health & Human Services (HHS) provide more funding to American Muslim clinics.
23. Provide greater capital access for faith-based communities, including American Muslims.

26. Support the religious freedom of Muslims overseas in China, India and Burma.
27. Adopt the U.S. Commission on International Religious Freedom’s (USCIRF) recommendation to sanction India as a violator of religious freedom for targeting Muslims.

28. Oppose the government of India’s illegal revocation of Article 370 of the Indian constitution, stripping the state of Jammu and Kashmir of its protected status and laying siege to its eight million residents.
29. Work with international partners to end the wholesale slaughter and mass displacement of the Syrian people.

31. Withdraw any U.S. military advisers to the Saudi-led coalition in Yemen and discontinue the sale of arms to the Kingdom of Saudi Arabia and the UAE.

33. Establish strict new oversight rules to severely limit and publicly detail the Pentagon’s use of drone warfare to engage in targeted killings overseas.