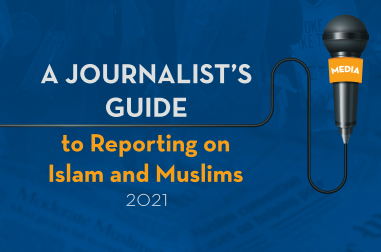 (WASHINGTON D.C., 8/23/2021) – The Council on American-Islamic Relations (CAIR), the nation’s largest Muslim civil rights and advocacy organization, today released a new edition of “A Journalist’s Guide to Reporting on Islam and Muslims,” designed to “give journalists and other media professionals the tools they need to gain a better understanding of Islam and write more informed, accurate and balanced stories about Muslims.”

CAIR released its new media guide in response to increased coverage of Islam and Muslims resulting from the crisis in Afghanistan. It offers “background information about Islam and Muslims, best practices for reporting on the Islamic faith and a list of accurate and appropriate terminology to employ when covering issues relating to Muslims.”

There are sections on “Basic Islamic Terminology,” “Myths About the Quran, Islam’s Revealed Text,” and on “Commonly Misused Terms” such as “Islamic terrorism,” “Islamist” and “Jihad.” Guidelines on how to make contact and interact with the Muslim community are also offered in CAIR’s new guide.

“We suggest that reporters be balanced in reporting about situations of war or conflict, but also cover non-crisis events in the Muslim world, such as international Islamic conferences, Muslim achievements and other notable stories unrelated to war or conflict. By regularly covering human-interest stories or positive events relating to American Muslims, journalists can help humanize a community often portrayed in the media through the prisms of extremism and terrorism.

“Journalists should also seek the opinions of Muslim experts on issues of their concern and issues affecting society as a whole, such as healthcare, the economy, etc. While it is important for Muslims to participate in discourse relating to Islam — just as experts from other religions and ethnic groups are consulted on issues relating to their group – Muslim voices should be included in stories about other contemporary issues.”

It concludes by stating:

“The vast majority of journalists are doing the best job they can with the information and resources they have available. It is the duty of the American Muslim community to ensure that every journalist who writes about Islam or Muslims has access to accurate information.

“We hope this guide will assist media professionals seeking to offer an accurate, balanced and nuanced representation of American Muslims and their faith.”

READ: A Journalist’s Guide to Reporting on Islam and Muslims