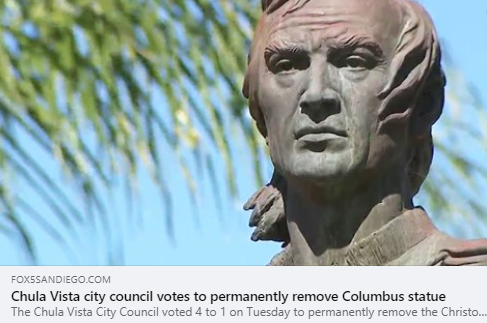 (SAN DIEGO, CA., 5/26/2021) – The San Diego chapter of the Council on American-Islamic Relations (CAIR-SD) today welcomes the Chula Vista City Council’s 4 to 1 vote on Tuesday to remove the statue of Christopher Columbus from Discovery Park.

The Kanap Kuahan Coalition rallied ahead of the council meeting in support of removing the statue. One community member shared her plea with the council, “The Columbus statue and monuments alike are reminders to my peers that white supremacy is not only condoned in our city, but glorified”.

According to FOX5, there are additional plans for the future of Discovery Park; a diverse task force will be in charge of honoring diversity and recommending a new name for the park.

“We know that this decision comes with opposition, but we are glad to see the Chula Vista City Council make the ​right decision in removing the statue. This is a small but necessary step toward bringing ​respect, equity and justice to the Kumeyaay people. We stand in solidarity with the San Diego Kumeyaay community to see continued efforts ​in recognizing and uplifting the Kumeyaay, the original people of this land.”