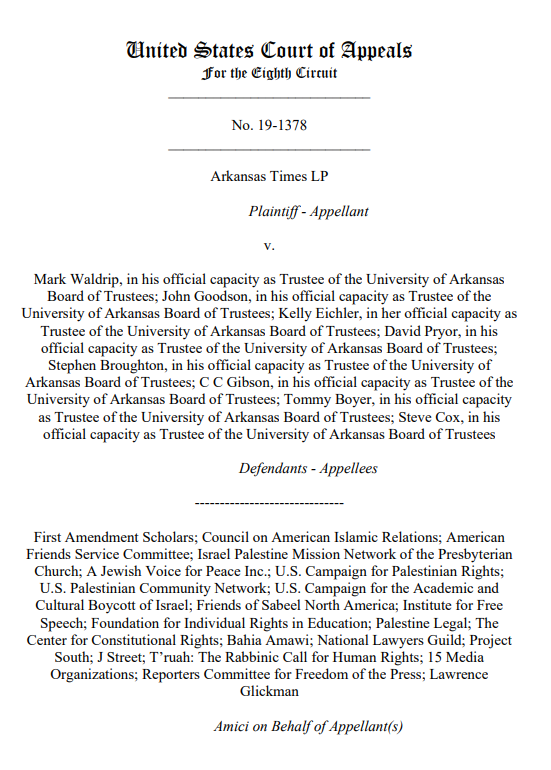 (WASHINGTON, D.C., 6/22/22) — The Council on American-Islamic Relations (CAIR), the nation’s largest Muslim civil rights and organization, today said a court ruling on an Arkansas law that requires Americans to sign an oath pledging not to boycott the Israeli government as a condition for working with the state is an “outlier” that endangers free speech.

A federal appeals court ruled Wednesday that a district court judge rightly dismissed a lawsuit filed by the Arkansas Times challenging the Arkansas law, which added a pledge to not boycott Israel as a part of vendor contracts with the state of $1,000 or more.

CAIR filed, along with numerous other civil rights groups, an amicus brief in the Arkansas case.

“By declaring Arkansas’ Anti-BDS Law to be constitutional, the court has tacitly endorsed a Palestine-exception to the First Amendment,” said CAIR National Litigation Director Lena Masri. “We will continue to support the Arkansas Times and the ACLU in their efforts to challenge this unconstitutional law.”

“We believe that the 8th Circuit has severely erred in its decision,” said CAIR Senior Litigation Attorney Gadeir Abbas.

“By ruling against The Arkansas Times, the Eight Circuit has broken with nearly every other court that has reviewed and struck down these unconstitutional, un-American anti-boycott laws. We hope The Arkansas Times fights this ruling, which endangers the free speech rights of every American.”

Mitchell added that CAIR recently filed a brief before the Fifth Circuit in CAIR’s First Amendment lawsuit on behalf of a Texas engineering firm that refused to sign an anti-BDS loyalty oath to Israel as part of the company’s contract with the City of Houston.

In Texas, the federal court held that that the state’s anti-boycott law “threatens to suppress unpopular ideas” and “manipulate the public debate” on Israel and Palestine “through coercion rather than persuasion.” The Court concluded: “This the First Amendment does not allow.”