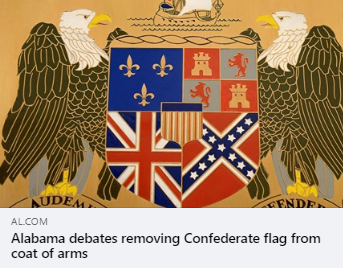 (WASHINGTON, D.C., 4/29/2021) – The Council on American-Islamic Relations (CAIR), the nation’s largest Muslim civil rights and advocacy organization, today supported an effort underway in the Alabama legislature to remove the Confederate flag from that state’s coat of arms and welcomed a decision to change a Virginia lake’s Confederate name.

In Alabama, the state’s coat of arms includes symbols of the five nations that have at various times held sovereignty over Alabama, one of which was the Confederate States of America. A debate is underway in the legislature to seek a redesign of the coat of arms without the Confederate symbol.

In Virginia, the Culpeper, Va., a town council committee recommended Lake Culpeper as the new name for a local reservoir, replacing Lake Pelham, which was named for a Confederate artillery officer.

“We support and welcome any and all efforts to remove or repudiate our nation’s sad legacy of slavery and white supremacy,” said CAIR Government Affairs Director Robert McCaw. “We agree with President Biden’s statement last night that ‘white supremacy is terrorism,” and all symbols honoring the white supremacists of the Confederacy should be removed.”

He noted thatyesterday, CAIR condemned racist vandalism of Native American petroglyphs in Utah and a bill to ban anti-racism teaching in Idaho. A CAIR representative also